BrandscoveryLast updated Sep 12, 2018Page Views 22
Share
When Susan Woodard, professor emeritus of music, was just beginning her teaching career, she heard a colleague declare, “Students today come to college to learn how to make a living, not to learn how to make a life.” The statement resonated deeply with Woodard: “Were students no longer interested in living a good life?” she … 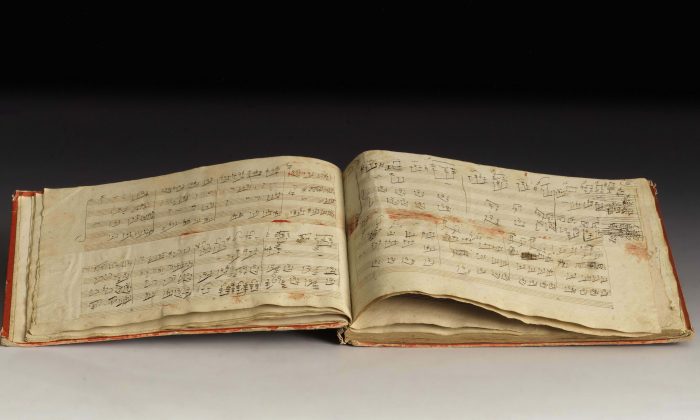 Ludwig van Beethoven’s autographed manuscript containing his own arrangement of "The Grand Fugue" for piano in four hands, Op. 134. The 2005 discovery showed that Beethoven revised his works throughout his entire creative life. (Sotheby's; The Juilliard Manuscript Collection)

In answer, Woodard spent much of her 47-year teaching career, mostly at Lawrence University in Wisconsin and Washington and Jefferson College in Pennsylvania, trying to awaken students to a good life, a morally virtuous life that would foster genuine awe and curiosity for the world and enable active and meaningful engagement with others. Such a life would entail a search for truth and beauty.

While truth and beauty may sound like “quaint, old moralistic ideas,” Woodard said, they remain relevant today, especially when undergraduates seem to have foregone the pleasure of sensory experience available through the arts in favor of “the rapid transit of electronic media.”  No matter how immeasurably technological advancements have added to our civilization, she worries they have had the unintended effect of eroding our ability to pause and reflect on truth or admire beauty, whether in nature or in art.

After noticing “the rich aroma of the forest, the temperature change during the recent eclipse” or hearing Ludwig van Beethoven’s “Moonlight Sonata,” we may sit with the experiences and describe for ourselves the emotional feelings they arouse, or “liken them metaphorically to other experiences, [which] helps to etch them into our memory,” she said.

Or when confronted with a news item of the day, we can find the “deeper story” that may not be apparent at first glance.

The same goes for art. “Beethoven’s music is almost always about freedom—personal or universal, yet until we look or listen into it deeply, we can miss that for the sweep of sonority on the surface or for a known narrative,” she said.

These searches for deeper understanding or that lead us to dwell on beauty allow “our own personal treasure hunts,” she said.

It is taking moments to pause and reflect—to deliberately and actively reconsider the world—that Woodard finds important. “To think about [our experiences], to describe the emotional feelings they arouse, [and] to liken them metaphorically to other experiences helps to etch them into our memory. These are acts of reconsidering,” she said.

To foster the act of reconsideration, the classics are powerful tools, Woodard believes. Delving beneath surface meanings while also pleasing the senses, the great classics of music, literature, and art, are themselves prototypes of the acts of reconsideration. They are works of discernment and nuanced expression, and throughout our history, they have again and again revisited ideas woven into our culture.

As such, “the classics supply endless subjects for study and considering,” she said. They may take time and patience to understand, but time and patience are the foundation of reflection, and ultimately, allow for “endless, joyful sustenance.”

A Master of Revision

As part of the college courses Woodard taught, primary sources (including composers’ sketches, letters, and most importantly, revisions) were key for students to see the processes of discernment and revision—“those habits of reflection and mindful consideration that cause a creative artist to be self-critical, to revise, improve and re-envision their work,” Woodard said.

Beethoven “who expanded and intensified virtually all the classical genres, endowing them with unimaginable power, energy, and above all, subjective personal expression,” she said, provides a powerful example of a master of revision.

In 1993, Woodard gained deeper insight into Beethoven’s process of composing when she took a seminar on his string quartets, taught by Lewis Lockwood, an internationally renowned musicologist specializing in the composer’s works.

The class compared two versions of Beethoven’s Six String Quartets, Op. 18, No. 1: his early composition from 1799 and his revised version, which has come down to us. Woodard was assigned to comb through the piece’s second movement and note the differences in the quartet’s inner voices, those of the second violin and viola.

In 110 measures, Beethoven made 97 revisions. Woodard discovered that nearly all of the edits were for the sake of sonority or intensification. “It blew my mind, the care that he took to get it just so,” she said. “Beethoven reconsidered every musical detail concerning quartet writing.”

With the publication of this composition, Beethoven established himself as a master composer of the genre.

Beethoven revised his works throughout his entire creative life, she explained. One example surfaced in 2005: An autographed manuscript in Beethoven’s hand, discovered in Philadelphia, was a re-scored version of “The Grand Fugue” for piano in four hands.

Written in the year before his death, “The Grand Fugue” was originally intended as the final movement of the String Quartet in B-flat major, Op. 130. But, according to his publisher, it was “too violent and lacking in continuity to suitably end the quartet,” Woodard said. Moreover, it was “overly long and difficult” for string players.

In response to his publisher, and perhaps unhappily, Beethoven wrote a substitute finale for the quartet, and published “The Grand Fugue” as a separate work, now “considered by many to be the last great fugue to be written … as its expressive powers transcend those of fugues written since,” she said.

Then, as the 2005 discovery attests, Beethoven amended “The Grand Fugue” and created a version for a piano duet, she said, which eliminated the problems it posed for string players.

The act of Beethoven revising his fugue so that it would be manageable for musicians underscores for Woodard that there is always “great power in things reconsidered.”

Through pausing, reflecting, and reworking, we can make our greatest contributions. This was true in Woodard’s own career.

As a young pianist at the Eastman School of Music, Woodard was drawn to the entire body of music by Sergei Rachmaninoff (1873–1943). In choosing her doctoral topic in the 1980s, she decided to focus on Rachmaninoff’s style, particularly his frequent reference to the ancient “Dies Irae” chant, a sequence from the Roman Catholic Mass for the dead, which depicts Judgment Day.

Reviews of concerts of Rachmaninoff’s music said that audiences found it “gloomy, tedious, and illustrative of a (purported) death wish,” Woodard said. But she had a hunch that Rachmaninoff’s voice could not be reduced to such a shallow interpretation. And with little more than a catalog of his works, some biographies, and scant discussion of his musical intentions, she hoped to fill a gap in knowledge with her research.

But after much effort bearing little fruit and meager scholarship to support her ideas, she feared she would be unable to complete her project before the degree deadline. It was then that her Ohio State University graduate adviser and mentor, professor Keith Mixter (1922–2009), suggested she begin again on an aligned topic: the origins, properties, and historical trajectory of the “Dies Irae” chant itself, noting the transition from its sacred to secular use.

This topic provided a vast body of sources for Woodard, and her project was readily completed. More importantly, her research established important links between the beginning of the medieval chant’s history to its journey to Russia and the cultural legacy Rachmaninoff had inherited. It would also lay a foundation from which Woodard could “with certainty and integrity” present her own hypothesis about Rachmaninoff’s style.

The lasting result has been that Woodard has presented numerous lectures and recitals on this topic. Her work has been included in a major bibliography on the uses of the “Dies Irae,” published by Indiana University Press, and, according to Ohio State, translated into more than 17 languages.

Had Woodard not followed Mixter’s advice to rework her project from a different perspective, she would neither have increased what she had learned exponentially nor made a contribution to her field.

In reflecting a bit more on her use of the term “reconsideration,” Woodard recalled Lawrence Kramer’s 2009 book “Why Classical Music Still Matters,” in which he talks about listening “into” music. He suggests training the ear and mind to “hearken” to music, not merely hearing it, but to attendinh to it closely.

For Woodard, “hearken” might be a better word than “reconsider.” “To hearken” mirrors the idea of the verb “to behold,” in the sense of gazing upon, embracing, and imagining, and pausing in one’s mind to search for truth.

“We need more of that state of hearkening,” she said. “We are here for such a short time that it behooves us to do well with that time.”