Discussion: ‘Traditional Versus Contemporary Perspectives in the Art World’

BrandscoveryLast updated Aug 22, 2018Page Views 41
Share
NEW YORK—Three high-profile artists, each with their distinct style and approach to painting representationally—Jacob Collins, Alex Kanevsky, and Alyssa Monks—participated in the first of the “FAA Dialogues.” The Florence Academy of Art–U.S. branch launched the free educational series (sponsored by The Robert Lehman Foundation and Natural Pigments) at the Salmagundi Art Club… 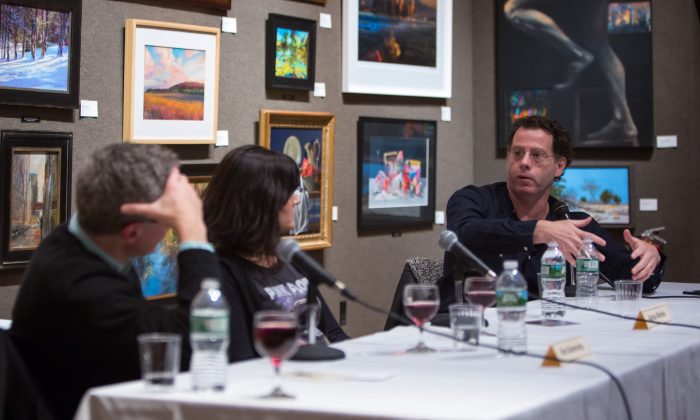 NEW YORK—Three high-profile artists, each with their distinct style and approach to painting representationally—Jacob Collins, Alex Kanevsky, and Alyssa Monks—participated in the first of the “FAA Dialogues.” The Florence Academy of Art–U.S. branch launched the free educational series (sponsored by The Robert Lehman Foundation and Natural Pigments) at the Salmagundi Art Club.

The fully packed club gallery buzzed with excitement as the artists grappled with “Traditional Versus Contemporary Perspectives in the Art World.” It was a timely topic considering that Christie’s had recently sold Leonardo da Vinci’s “Salvator Mundi” in their “post-war and contemporary art evening sale.”

Despite starting with such loaded terms as “traditional” and “contemporary,” the discussion developed in broad strokes—more like a living room conversation than a debate. As Fine Art Connoisseur editor-in-chief Peter Trippi moderated, the artists unraveled their thoughts and shared their convictions about their personal artistic choices in contrast, or in tandem, with other artistic practices.

All three welcomed a broad and vast art world, in terms of styles, and were somewhat reluctant to make definitive statements about the culture at large. At one point in the discussion, Trippi noted the absence of the art critic who had been invited to participate in order to give a different perspective, but who was indisposed that evening. “I feel keenly the absence of Donald Kuspit. He has written so eloquently for 50 years about art of different kinds,” Trippi said.

Overall, given the attentiveness of the audience, it was clear how much everyone valued the opportunity to partake in a community that cares about a healthy development of the arts. The following is an extremely short excerpt of some of the key points that were discussed.

Trippi first asked the artists to elaborate on their own definitions of “traditional” and “contemporary” art. Both Monks and Kanevsky considered that duality irrelevant to some extent, calling for an aesthetic that can integrate and synthesize contemporary and traditional aspects. “There are overlapping rivers of traditions that flow in parallel … The first abstract painting was done nearly a hundred years ago, so is it traditional or is it contemporary?” Kanevsky asked.

Collins pointed out the complexity in the meaning and the use of those terms. There’s a certain flavor to the idea of “contemporary art” and “it’s associated with all kinds of things, including European and American politics, going back to the first half of the 19th century—that idea of forward-looking versus backward-looking in terms of the self-identification of artists and cultural actors,” Collins said.

With regard to tradition, Trippi addressed the concern for how art is made. “There are these time-honored, hard-won skills that must be developed first before brilliance is achieved. There is that approach, that notion, and therefore a kind of potential resentment towards anyone who comes along into the same marketplace and just has a great idea, but doesn’t really know how to execute it in a really fine, well-crafted way. Is that a trade threat? Is that a problem, either personally, or commercially, or critically?”

Monks studied at the New York Academy of Art because she was interested in learning the craft of painting. She learned to render figures and faces in a realistic way on a large scale. But she noted it would be problematic if she would only focus on honing her skills. She compared an “Apollonian” sensibility, which emphasizes order, with a “Dionysian” sensibility, which emphasizes chaos. In the past 20 years, she has been trying “to synthesize the two in order to have an evocative body of work that can grasp both of those ideas.”

“There’s a minimum level of skill that needs to be acquired in realism,” Kanevsky chimed in, “just as it would be in playing the violin, for example, but at a certain point it becomes unimportant.”

Later, Collins picked up on the violin analogy to emphasize that acquiring skills is only meaningful in relation to what you are trying to do. “I could get really good at playing the violin in preparation for a tennis match and that would not be meaningful. In some ways [the confusion of what skills to use for what end] is the destructive influence of the explosion of modernism from the end of the 19th century to the first half of the 20th century. It destroyed the forms.”

Collins is a leading figure in the academic/classical painting tradition and is the founder of Grand Central Atelier. He has dedicated his artistic career to building an aesthetic in which the skills acquired are aligned with what he wants to achieve. He said, that alignment “becomes a unity where you are doing something that can be understood rather than floating about, not knowing what you are trying to do.” He seemed to conjure, for example, the post-World War I Dada art movement that revelled in expressing nonsense and irrationality, and the other -isms such as surrealism, modernism, and postmodernism.

“In history, the legacy of the Avant Garde is fundamentally that destructive impulse, which is to destroy standing forms [that have developed through time within a tradition]… I think the traditional resurrection, or whatever it is that I have spent my life trying to do, precedes the influence of modernism.”

Traditional forms are recognizable along with their aesthetic, their philosophical basis, and their technical skill set.  That “spirit of art … was made in different little pockets, whether it was Spain, Italy, France, or Germany in that period somewhere in between 1450 and 1850, Collins said.

“For me the question of skills is going into that world and trying to extract from it a way in which I can live in those forms.… I can get extremely skillful at all kinds of things, but what I am interested in (and I am not speaking for anyone else) is that idea of the form that was not developed by any individual person, but that was a cultural project.”

There have been certain artists who have furthered the dynamic of a specific form, Kanevsky said. “Everybody is doing a pieta [paintings], then Michelangelo comes about [creates his pieta sculpture], and all the previous pieta’s somehow don’t matter anymore, so somebody like Lucian Freud, I think he would have something to discuss, let’s say, with Piero della Francesca because they created similar situations—they managed to move things along quite dramatically. Maybe it would not be possible without hundreds of other artists working on the same thing, but they moved it [like a paradigm shift]; that’s what makes a difference. That’s why the contemporary versus the traditional in my mind does not make sense. It’s not chronological. … It’s not that contemporary art is a culmination of everything that we have been trying to do so far. It doesn’t get better than Rembrandt.”

Trippi brought up issues about branding, the influence of the image making and writing by art critics, curators, and auction houses, and so forth, on impressionable newcomers to the art market.

Collins agreed with Trippi’s point, and said, “I feel that without some kind of intellectual architecture, a market isn’t going to develop to embrace them all or even some of the good ones. That has been on my mind a lot.” He was referring to artists who have studied with him and to artists who share similar passions. In terms of what is written about art today, artists who share Collins’s highly-skilled aesthetic approach are hardly acknowledged.

“It’s not necessarily the writers [and art critics], although they are part of it. It’s the patronage group [who can really influence the direction of particular art practices]… If the artists themselves have some clarity about what they are trying to do, they can then hopefully transmit that to the people who love their work—people respond to them emotionally, naturally. If they can name it, then they can spread it, and that little patronage group can serve as a nexus for the culture at large, to help that little group of artists have a better chance to thrive,” Collins said.

Monks emphasized the importance of community, which Trippi also reiterated in his closing remarks. “When somebody comes into my studio, I connect with them on a personal level and that tends to spread outside. They talk to other people [about my work] and bring in [more] people. I have to say it is community. It’s important to think about branding, your website, and your Instagram account, but support other artists, be interested in each other’s work, and hold each other up because artists are the ones who make other artists succeed. That’s been my experience. It’s the artist that I looked up to who have helped me get shows and collectors—so buddy up,” Monks said. 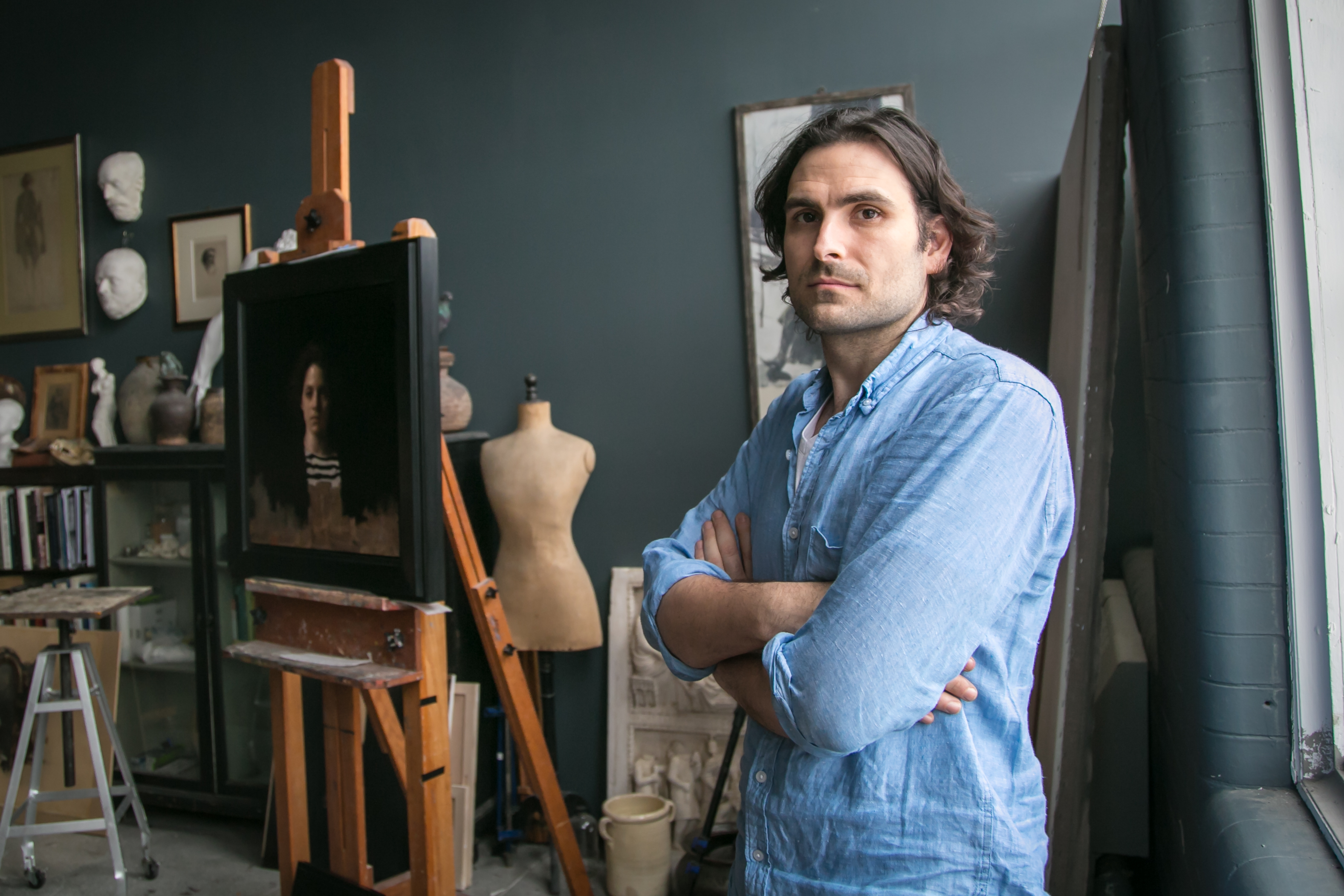 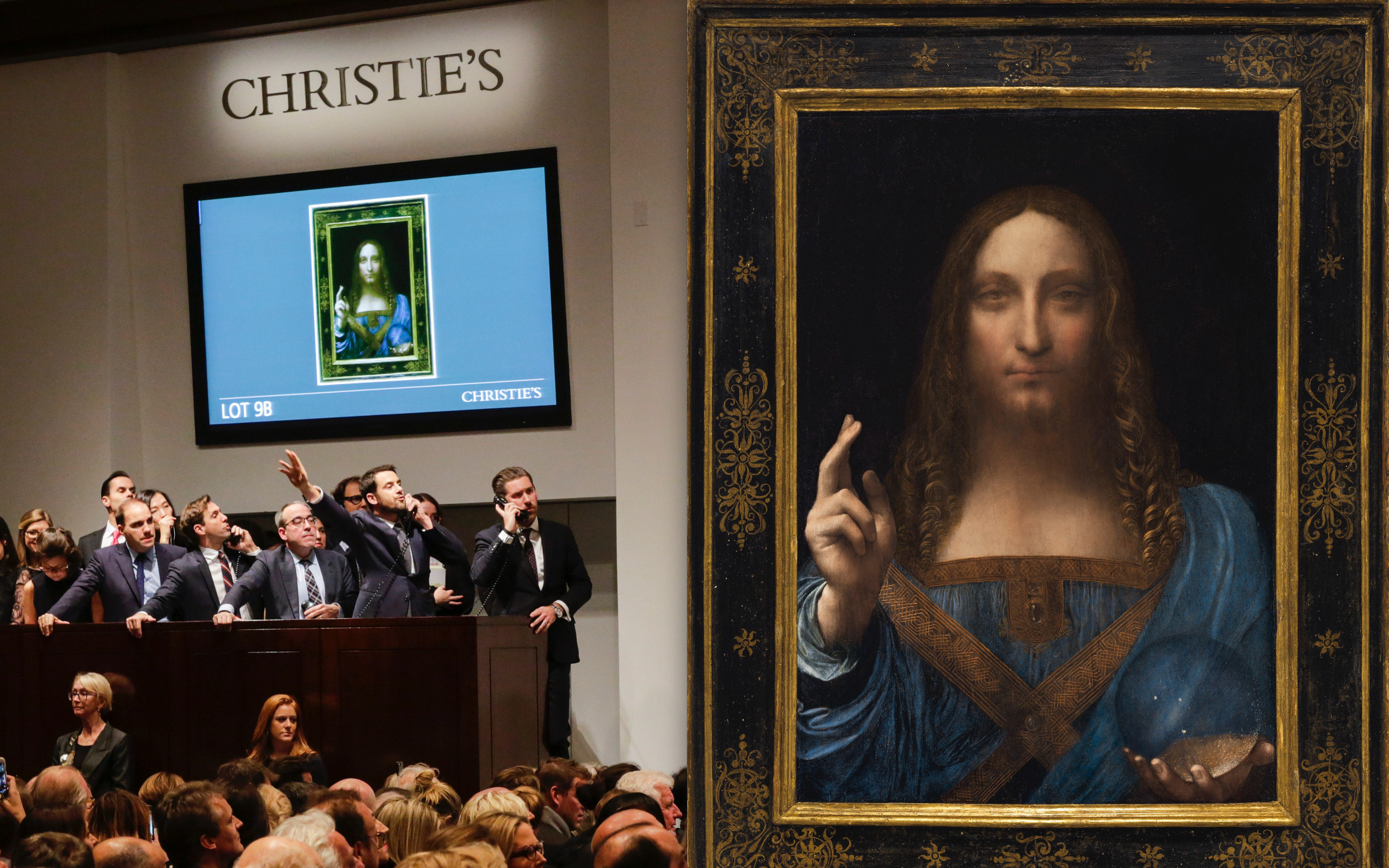 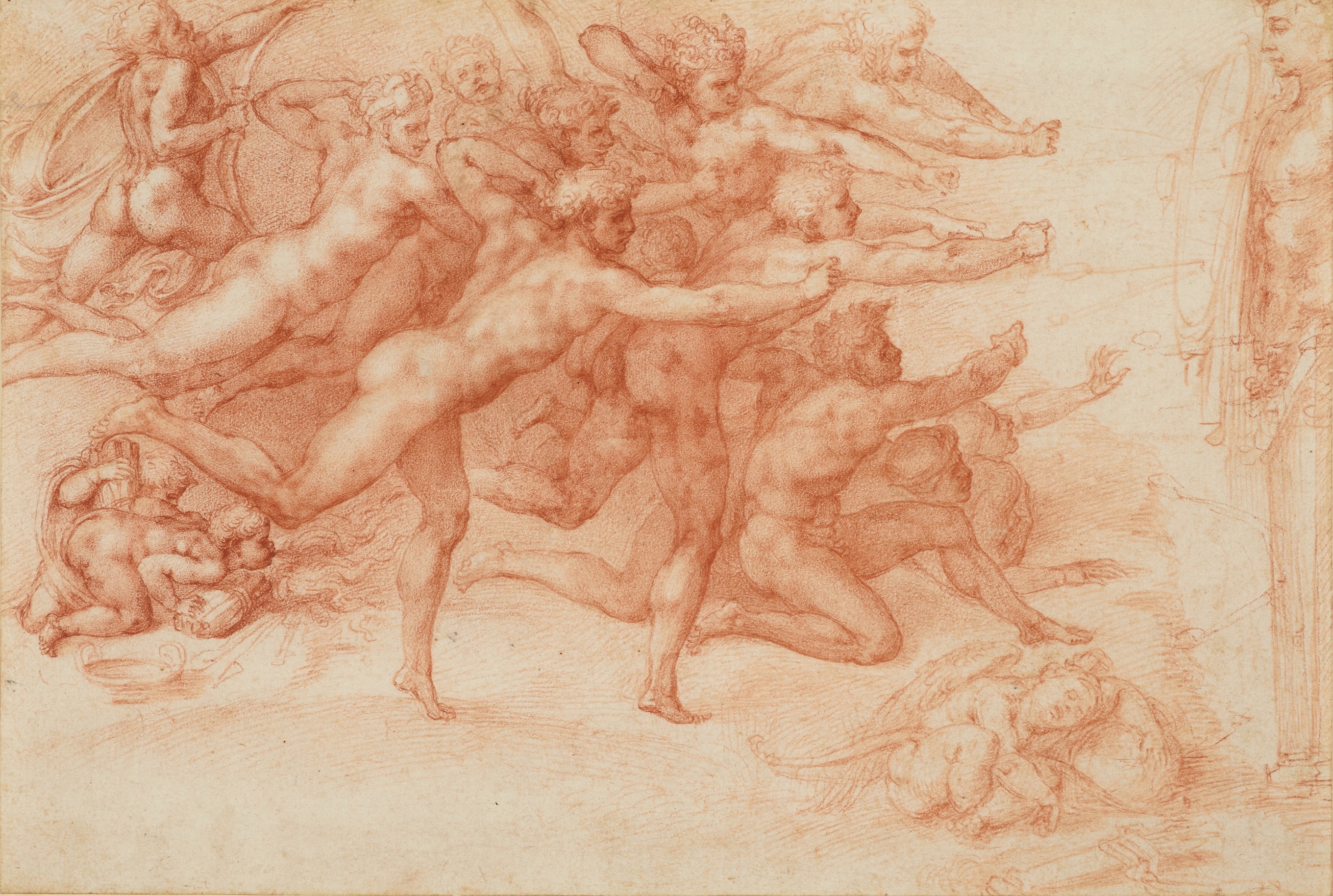 The Divine Creative Process of Michelangelo 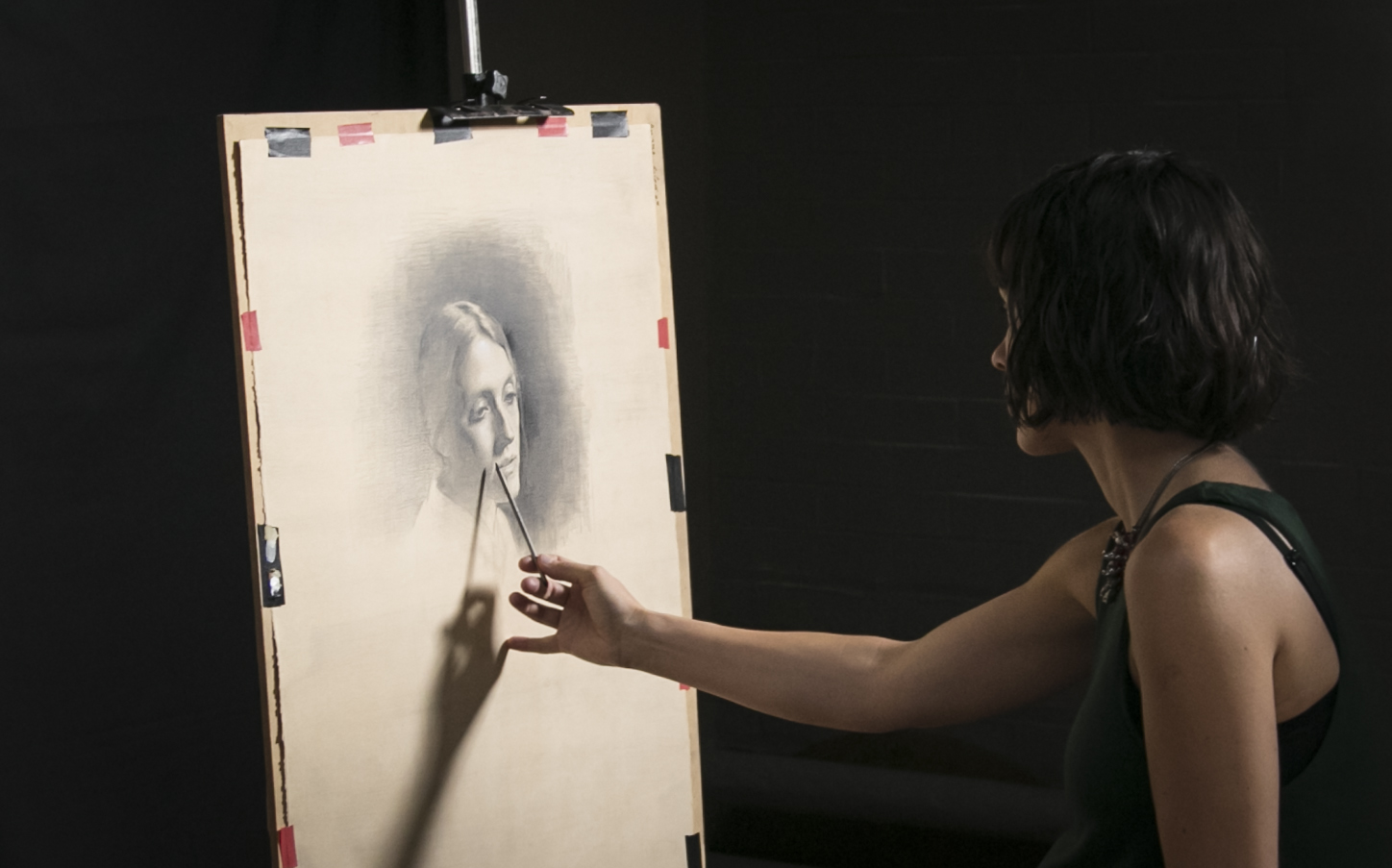 A Resurgence of Art