BrandscoveryLast updated Apr 11, 2018Page Views 2
Share
The U.S. State Department has approved a long-standing request from Taiwan to solicit help from American companies in building its own indigenous submarines. While the go-ahead is only the first step in a long process, observers say the decision reflects the Trump administration’s commitment to strengthen Taiwan’s defense and deter the Chinese regime’s aggression. Taiwan’s … 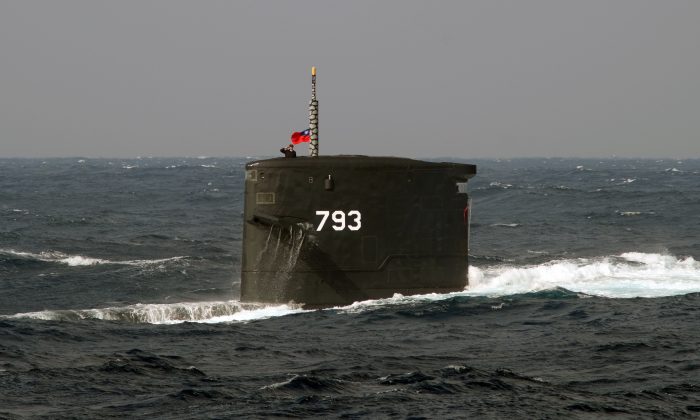 A Taiwanese navy soldier salutes from the Dutch-made Chien Lung-class submarine during a combat skills demonstration in the waters near the Tsoying navy base in southern Kaohsiung, Taiwan on Jan. 14, 2014. (Sam Yeh/AFP/Getty Images)

The U.S. State Department has approved a long-standing request from Taiwan to solicit help from American companies in building its own indigenous submarines. While the go-ahead is only the first step in a long process, observers say the decision reflects the Trump administration’s commitment to strengthen Taiwan’s defense and deter the Chinese regime’s aggression.

Taiwan’s Ministry of National Defense (MND) confirmed on April 7 a Taiwanese media report that the U.S. government has awarded a marketing license in support of the island nation’s efforts to develop its own diesel-electric submarines. It added that it “expresses its thanks to the U.S. government for attaching importance to Taiwan’s defense and security.”

“A marketing license means that the U.S. companies can share brochures and technical information so that Taiwan can consider making a purchase,” said David An, a senior research fellow with the Global Taiwan Institute and a former State Department political-military affairs officer.

While the news has since been widely reported by Taiwanese and international media, neither U.S. nor Taiwan official statements make clear which particular submarine part or technology the “marketing license” has authorized Taiwan to seek from U.S. companies.

Fu S. Mei, director of the New York-based Taiwan Security Analysis Center and an expert in U.S.-Taiwan arms sales, said that the marketing license in question would allow one unnamed U.S. company to demonstrate specifications of its submarine combat system to Taiwan.

A marketing license does not guarantee Taiwan would be able to purchase the parts or technology it has been shown, which would require a separate “export license.” But experts say that the decision by the Trump administration to greenlight the technology demo is an important step for Taiwan, which has been struggling for over a decade to build a new fleet of submarines.

“United States is careful about even approving ‘marketing’ licenses,” said David An, “It is a good sign for Taiwan, since the U.S. approves marketing licenses for items that it has a high chance of actually approving the final ‘export’ license.”

Beijing has continued to build up and modernize the naval and air forces of the People’s Liberation Army (PLA) along with other military platforms such as ballistic missiles in preparation for a possible military campaign against Taiwan.

The Taiwanese navy, while commanding a sizeable surface fleet with over two dozen destroyers and frigates, has only two combat-capable submarines that the island nation acquired from the Netherlands in the 1990s.

Over the past decade, a select number of U.S. defense writers and also some Taiwanese have questioned the usefulness of the submarines for Taiwan. Ultimately however, a majority of the analysts and the Taiwan military itself see submarines as a critical asset for Taiwan to counter the Chinese regime’s military threat asymmetrically, and to complicate and thwart any invasion attempt by the PLA.

“Submarines will contribute to the survival of a democratic Taiwan, which by simply surviving denies the middle of the first island chain to China, and also strengthens the defense of Japan’s islands in the Ryukyu Island chain,” said Richard Fisher, a senior fellow with the International Assessment and Strategy Center.

Tsai Ing-wen, the incumbent Taiwan President, has reportedly committed her administration to build a fleet of at least 8 Indigenous Defense Submarines (IDS). Her party, the Democratic Progressive Party of Taiwan, has published a defense policy blue paper back in 2015 calling for new submarines to enter service by 2025.

“This decision [to approve a marketing license] is a testament to the Trump Administration’s new willingness to view Taiwan as a strategic benefit to the United States,” said Fisher, who also pointed out that Taiwan is already fully committed to moving ahead with the program and that European contractors have already scored some business with it.