Trump Appointing Bolton Has Everything to Do With Iran

BrandscoveryLast updated Mar 23, 2018Page Views 3
Share
Views expressed in this article are the opinions of the author and do not necessarily reflect the views of The Epoch Times. 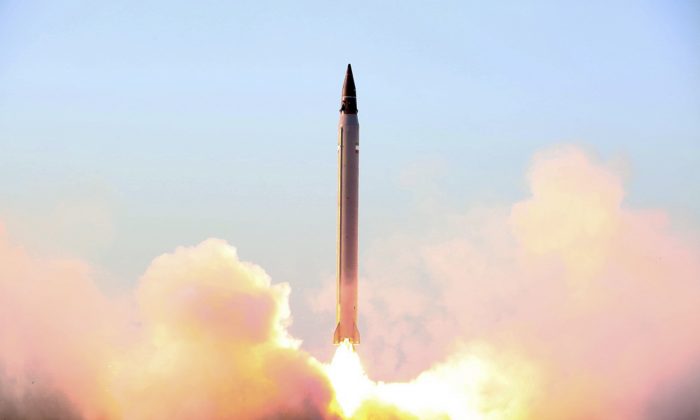 The launching of an Iranian ballistic missile at an undisclosed location in Iran on Oct. 11, 2015. President Trump wants Iran's ballistic missile program to become part of the nuclear agreement. (Iranian Defense Ministry)

The appointment of John Bolton as National Security Adviser is a key indicator that President Donald Trump is preparing to take the next step in countering the Iran nuclear weapons threat.

Contrary to his predecessor, National Security Adviser H.R. McMaster, Bolton is a longtime fierce opponent to the 2015 nuclear deal the Obama administration reached with Iran.

Trump announced in January this year that he would sign one more waiver allowing the deal, officially called the Joint Comprehensive Plan of Action, giving 120 days for improvements to the deal to be made.

The President has demanded the so-called sunset clauses that would enable Iran to develop a nuclear weapon by 2026 to be removed, as well as for its ballistic missile program to be included in the deal.

Absent of those two improvements, Trump has said he will pull the United States out of the deal between Iran and the United States, France, Russia, China, United Kingdom, Germany, and the European Union.

Prior to the passing of the deadline, Trump has started to take key steps to increase pressure on Iran.

Last week he replaced Secretary of State Rex Tillerson with CIA chief Mike Pompeo. Tillerson and Trump had divergent views on how to handle the Iranian nuclear crisis.

Earlier this week he met with Saudi Crown Prince Mohammed bin Salman, a key strategic ally in the region and a fierce opponent to Iran’s nuclear weapons program.

Salmen told CBS’ 60-minutes program that if Iran would obtain a nuclear weapon, Saudi Arabia would immediately do the same.

On Wednesday, Israel took the unusual step to release images and footage of a covert 2007 air raid it conducted on a nuclear plant in Syria.

Israel’s intelligence minister, Israel Katz, said that his country intended to make clear that “Israel will never allow nuclear weaponry to be in the hands of those who threaten its existence – Syria then, and Iran today.”

The Israeli military described in detail events leading up to the night of Sept 5-6, 2007, in which, it said, eight warplanes, F-16s and F-15s, carried out the mission after taking off from the Ramon and Hatzerim air bases.

For President Trump, leverage is key in any negotiation, and Israel sending a message that it has the ability to destroy Iran’s nuclear plants is providing him with that.

In a January op-ed published in the Wall Street Journal, Bolton writes that: “Mr. Trump correctly sees Mr. Obama’s deal as a massive strategic blunder, but his advisers have inexplicably persuaded him not to withdraw.”

Bolton also said that “Putting lipstick on this deal will not fix it.”

With his new team soon in place, Trump now has the puzzle-pieces in place to make his next move against Iran.