Why Does the Universe Have More Matter Than Antimatter?

Benjamin JohnsonLast updated Apr 13, 2018Page Views 23
Share
An international team of physicists, including researchers at MIT, have reported the first results from an underground experiment designed to answer one of physics most fundamental questions: Why is our universe made mostly of matter? According to theory, the Big… 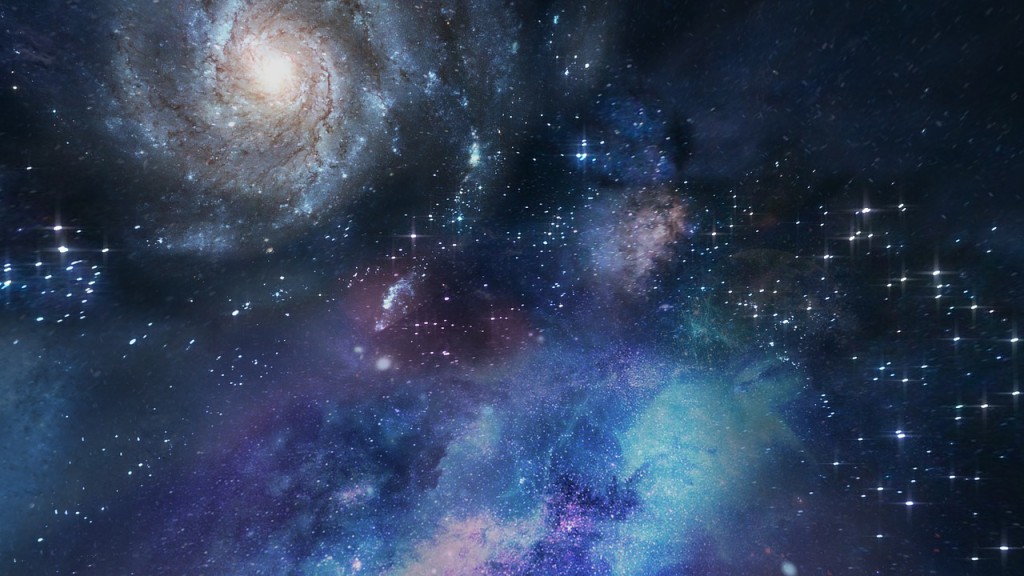 An international team of physicists, including researchers at MIT, have reported the first results from an underground experiment designed to answer one of physics most fundamental questions: Why is our universe made mostly of matter?

According to theory, the Big Bang should have produced equal amounts of matter and antimatter — the latter consisting of “antiparticles” that are essentially mirror images of matter, only bearing charges opposite to those of protons, electrons, neutrons, and other particle counterparts.

And yet, we live in a decidedly material universe, made mostly of galaxies, stars, planets, and everything we see around us — and very little antimatter. Physicists posit that some process must have tilted the balance in favor of matter during the first moments following the Big Bang.

One such theoretical process involves the neutrino — a particle that, despite having almost no mass and interacting very little with other matter, is thought to permeate the universe, with trillions of the ghostlike particles streaming harmlessly through our bodies every second.

There is a possibility that the neutrino may be its own antiparticle, meaning that it may have the ability to transform between a matter and antimatter version of itself.

If that is the case, physicists believe this might explain the universe’s imbalance, as heavier neutrinos, produced immediately after the Big Bang, would have decayed asymmetrically, producing more matter, rather than antimatter, versions of themselves.

One way to confirm that the neutrino is its own antiparticle is to detect an exceedingly rare process known as a “neutrinoless double-beta decay,” in which a stable isotope, such as tellurium or xenon, gives off certain particles, including electrons and antineutrinos, as it naturally decays. 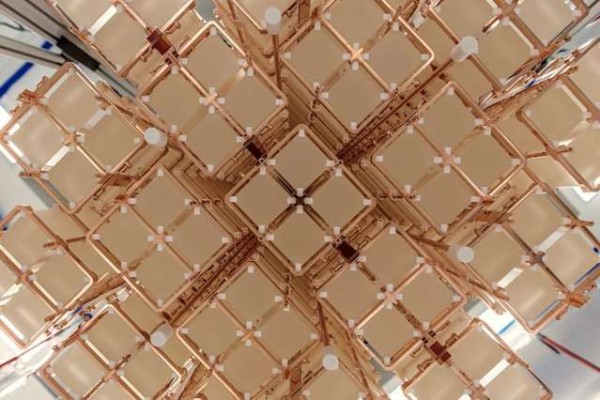 Bottom view of the 19 CUORE towers installed in the cryostat. (Image: CUORE Collaboration)

If the neutrino is indeed its own antiparticle, then according to the rules of physics, the antineutrinos should cancel each other out, and this decay process should be “neutrinoless.” Any measure of this process should only record the electrons escaping from the isotope.

The underground experiment known as CUORE, for the Cryogenic Underground Observatory for Rare Events, is designed to detect a neutrinoless double-beta decay from the natural decay of 988 crystals of tellurium dioxide.

In a paper published this week in Physical Review Letters, researchers, including physicists at MIT, report on the first two months of data collected by CUORE (Italian for “heart”). And while they have not yet detected the telltale process, they have been able to set the most stringent limits yet on the amount of time that such a process should take, if it exists at all.

Based on their results, they estimate that a single atom of tellurium should undergo a neutrinoless double-beta decay, at most, once every 10 septillion (1 followed by 25 zeros) years.

Taking into account the massive number of atoms within the experiment’s 988 crystals, the researchers predict that within the next five years they should be able to detect at least five atoms undergoing this process, if it exists, providing definitive proof that the neutrino is its own antiparticle.

“It’s a very rare process — if observed, it would be the slowest thing that has ever been measured,” says CUORE member Lindley Winslow, a member of the Laboratory for Nuclear Science and the Jerrold R. Zacharias Career Development Assistant Professor of Physics at MIT, who led the analysis. “The big excitement here is that we were able to run 998 crystals together, and now we’re on a path to try and see something.”

The CUORE collaboration includes some 150 scientists, primarily from Italy and the U.S., including Winslow and a small team of postdocs and graduate students from MIT.

Coldest cube in the universe

The CUORE experiment is housed underground in the Italian National Institute for Nuclear Physics (INFN) Gran Sasso National Laboratories buried deep within a mountain in central Italy in order to shield it from external stimuli, such as the constant bombardment of radiation from sources in the universe.

The heart of the experiment is a detector consisting of 19 towers, each containing 52 cube-shaped crystals of tellurium dioxide, totaling 988 crystals in all, with a mass of about 742 kilograms, or 1,600 pounds.

Scientists estimate that this amount of crystals embodies around 100 septillion atoms of the particular tellurium isotope. Electronics and temperature sensors are attached to each crystal to monitor signs of their decay.

The entire detector resides within an ultracold refrigerator, about the size of a vending machine, that maintains a steady temperature of 6 millikelvin, or -459.6°F. Researchers in the collaboration have previously calculated that this refrigerator is the coldest cubic meter that exists in the universe. 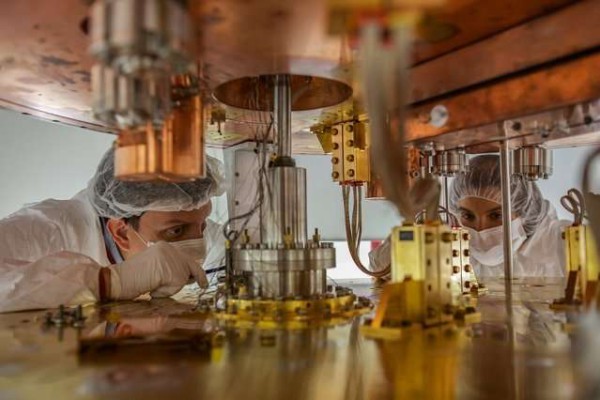 The experiment needs to be kept exceedingly cold in order to detect minute changes in temperature generated by the decay of a single tellurium atom. In a normal double-beta decay process, a tellurium atom gives off two electrons, as well as two antineutrinos, which amount to a certain energy in the form of heat.

In the event of a neutrinoless double-beta decay, the two antineutrinos should cancel each other out, and only the energy released by the two electrons would be generated. Physicists have previously calculated that this energy must be around 2.5 megaelectron volts (Mev).

In the first two months of CUORE’s operation, scientists have essentially been taking the temperature of the 988 tellurium crystals, looking for any miniscule spike in energy around that 2.5 Mev mark.

“CUORE is like a gigantic thermometer,” Winslow says. “Whenever you see a heat deposit on a crystal, you end up seeing a pulse that you can digitize. Then you go through and look at these pulses, and the height and width of the pulse corresponds to how much energy was there.

“Then you zoom in and count how many events were at 2.5 Mev, and we basically saw nothing. Which is probably good because we weren’t expecting to see anything in the first two months of data.”

The heart will go on

The results more or less indicate that within the short window in which CUORE has so far operated, not one of the 1,000 septillion tellurium atoms in the detector underwent a neutrinoless double-beta decay.

Statistically speaking, this means that it would take at least 10 septillion years for a single atom to undergo this process if a neutrino is in fact its own antiparticle.

“For tellurium dioxide, this is the best limit for the lifetime of this process that we’ve ever gotten,” Winslow says.

CUORE will continue to monitor the crystals for the next five years, and researchers are now designing the experiment’s next generation, which they have dubbed CUPID — a detector that will look for the same process within an even greater number of atoms. Beyond CUPID, Winslow says there is just one more bigger iteration that would be possible before scientists can make a definitive conclusion.

“If we don’t see it within 10 to 15 years, then, unless nature chose something really weird, the neutrino is most likely not its own antiparticle,” Winslow says.

“Particle physics tells you there’s not much more wiggle room for the neutrino to still be its own antiparticle, and for you not to have seen it. There’s not that many places to hide.”

Provided by: Massachusetts Institute of Technology [Note: Materials may be edited for content and length.]

The post Why Does the Universe Have More Matter Than Antimatter? appeared first on Vision Times.