Did Microbes 3.5 Billion Years Ago Contribute to Early Global Warming?

BrandscoveryLast updated Apr 24, 2018Page Views 28
Share
Scientists conclude methane-producing microbes date back 3.5 billion years, supporting the hypothesis that they could have contributed to early global warming.  Early forms of life very likely had metabolisms that transformed the primordial Earth, such as initiating the carbon cycle…

Scientists conclude methane-producing microbes date back 3.5 billion years, supporting the hypothesis that they could have contributed to early global warming.  Early forms of life very likely had metabolisms that transformed the primordial Earth, such as initiating the carbon cycle and producing most of the planet’s oxygen through photosynthesis.

About 3.5 billion years ago, the Earth seems to have already been covered in liquid oceans, but the sun at that time was not bright or warm enough to melt ice.

To explain how the oceans remained unfrozen, it has been suggested that greenhouse gases such as methane produced warming in the early atmosphere, just as they do in global warming today.

Naturally occurring methane is mainly produced by a group of microbes, methanogenic archaea, through a metabolism called methanogenesis. 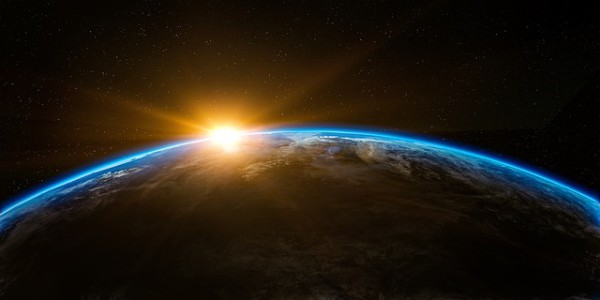 About 3.5 billion years ago, the Earth seems to have already been covered in liquid oceans, but the sun at that time was not bright or warm enough to melt ice. (Image: via pixabay / CC0 1.0)

While there is some evidence from carbon isotope data that sources of methane as ancient as 3.5 billion years old may have been biological in origin, until now there has been no solid evidence that methane-producing microbes existed early enough in Earth’s history to be responsible for keeping the early Earth warmed up.

Now, in a paper published in the journal Nature Ecology and Evolution, Jo Wolfe, a postdoc in the Department of Earth, Atmospheric, and Planetary Sciences (EAPS) at MIT, and Gregory Fournier, an assistant professor in EAPS, report new work combining horizontal gene transfer data with the microbial fossil record that allowed them to estimate absolute ages for methane-producing microbes on the geological timeline.

Wolfe is a paleontologist specializing in how fossil and living animal species are related in the tree of life. Fournier specializes in exploring how genomes from living organisms can be used to study the early evolution of microbes. Cracking this puzzle required both areas of expertise, Wolfe said:

“Trace chemical evidence hints that methane and the microbes that produced it could have been present, but we didn’t know whether methogenic archaea were actually present at that time.”

To bridge between fossil and genomic data, Wolfe and Fournier used genomes from living microbes that preserve a record of their early history. These DNA sequences can be accessed through phylogenetic analysis and compared to one another, the researchers explain, in order to find the best branching “tree” that describes their evolution.

As one works back along this tree, the branches represent increasingly ancient lineages of microbes that existed in Earth’s deep history.

Changes along these branches can be measured, producing a molecular clock that calculates the rate of evolution along each branch, and, from that, a probabilistic estimate of the relative and absolute timing of common ancestors within the tree. A molecular clock requires fossils, however, which methanogens lack.

Calibrating the tree of life

In order to solve this difficulty, Wolfe and Fournier harnessed horizontal gene transfers, or swaps of genetic material between the ancestors of different groups of organisms.

Unlike vertical transmission of DNA from parent to offspring — which is how most human genes are inherited — horizontal transfers can pass genes between distantly related microorganisms.

They found that genes were donated from a group within the methanogenic archaea to the ancestor of all oxygen-producing photosynthetic cyanobacteria, which do have some fossils.

Using the gene transfers and the cyanobacterial fossils together, they were able to constrain and guide the molecular clock of methane producers, and found that the methane-producing microbes were indeed over 3.5 billion years old, supporting the hypothesis that these microbes could have contributed to early global warming, Fournier said:

“This is the first study to combine gene transfers and fossils to estimate absolute ages for microbes on the geological timeline.

“Knowing the ages of microbial groups allows us to expand this powerful approach to study other events in early planetary and environmental evolution, and eventually, to build a timescale for the tree of all life.”

Provided by: Massachusetts Institute of Technology [Note: Materials may be edited for content and length.]