Benjamin JohnsonLast updated May 14, 2018Page Views 143
Share
A multitude of discoveries are on the horizon after a much-awaited release that is based on 22 months of charting the sky as part of Gaia’s mission to produce the largest, most precise three-dimensional map of our Galaxy ever created. The new… 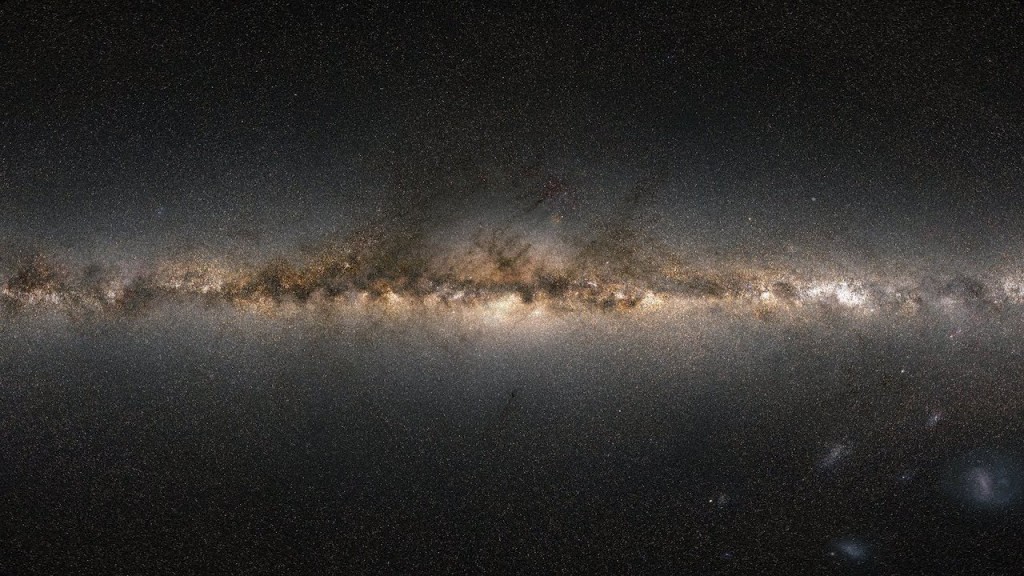 A multitude of discoveries are on the horizon after a much-awaited release that is based on 22 months of charting the sky as part of Gaia’s mission to produce the largest, most precise three-dimensional map of our Galaxy ever created.

The new data includes positions, distance indicators, and motions of more than 1 billion stars, along with high-precision measurements of asteroids within our Solar System and stars beyond our own Milky Way Galaxy.

Preliminary analysis of this phenomenal data reveals fine details about the makeup of the Milky Way’s stellar population and about how stars move, essential information for investigating the formation and evolution of our home Galaxy, Günther Hasinger, ESA Director of Science said:

“The observations collected by Gaia are redefining the foundations of astronomy.

“Gaia is an ambitious mission that relies on a huge human collaboration to make sense of a large volume of highly complex data.

“It demonstrates the need for long-term projects to guarantee progress in space science and technology and to implement even more daring scientific missions of the coming decades.”

This unique mission is reliant on the work of Cambridge researchers who collect the vast quantities of data transmitted by Gaia to a data processing centre at the University, overseen by a team at the Institute of Astronomy.

Cambridge’s Professor Gerry Gilmore, Principal Investigator for the UK participation in the Gaia Data Processing and Analysis Consortium, and one of the original proposers of the mission to ESA, said:

“There is hardly a branch of astrophysics which will not be revolutionised by Gaia data.

“The global community will advance our understanding of what we see, where it came from, what it is made from, how it is changing. All this is made freely available to everyone, based on the dedicated efforts of hundreds of people.”

Gaia was launched in December 2013 and started science operations the following year. The first data release, based on just over one year of observations, was published in 2016; it contained distances and motions of 2 million stars.

The new data release, which covers the period between July 25, 2014 and May 23, 2016, pins down the positions of nearly 1.7 billion stars, and with a much greater precision.

For some of the brightest stars in the survey, the level of precision equates to Earth-bound observers being able to spot a Euro coin lying on the surface of the Moon.

With these accurate measurements, it is possible to separate the parallax of stars — an apparent shift on the sky caused by Earth’s yearly orbit around the Sun — from their true movements through the Galaxy.

The new catalogue lists the parallax and velocity across the sky, or proper motion, for more than 1.3 billion stars. From the most accurate parallax measurements, about 10 percent of the total, astronomers can directly estimate distances to individual stars.

The comprehensive dataset provides a wide range of topics for the astronomy community. As well as positions, the data include brightness information of all surveyed stars and color measurements of nearly all, plus information on how the brightness and color of half a million variable stars change over time.

It also contains the velocities along the line of sight of a subset of 7 million stars, the surface temperatures of about a hundred million and the effect of interstellar dust on 87 million.

Gaia also observes objects in our Solar System: The second data release comprises the positions of more than 14,000 known asteroids, which allows precise determination of their orbits. A much larger asteroid sample will be compiled in Gaia’s future releases.

Further afield, Gaia closed in on the positions of half a million distant quasars, bright galaxies powered by the activity of the supermassive black holes at their cores.

These sources are used to define a reference frame for the celestial coordinates of all objects in the Gaia catalogue, something that is routinely done in radio waves, but now for the first time is also available at optical wavelengths.

Major discoveries are expected to come once scientists start exploring Gaia’s new release. An initial examination performed by the data consortium to validate the quality of the catalog has already unveiled some promising surprises — including new insights on the evolution of stars.

“This data release has proven an exciting challenge to process from spacecraft camera images to science-ready catalogs.

“More sophisticated strategies and updated models will be applied to the Gaia data to achieve even more precise and accurate photometric and spectrophotometric information, which will enable even more exciting scientific investigations and results.”

“Gaia has so far observed each of its more than 1.7 billion sources on average about 200 times.

“This very large data set has to have all the changing satellite and sky responses removed, and everything converted on to a well-defined scale of brightness and color. While a huge challenge, it is worth it.”

“Groups of dwarf galaxies, including the Magellanic Clouds, can now be observed to be moving around in very similar orbits, hinting at a shared formation history.

“Similarly, a pair of globular clusters has been observed with very similar orbital characteristics and chemical composition, again pointing towards a shared history of formation.

“The accurate observed motions and positions of the globular clusters and dwarf galaxies provide tracers of the overall mass distribution of our galaxy in a way that has not been possible with this level of accuracy before.”

Walton, a member of the ESA Gaia Science Team, said:

“The Gaia data will be a globally accessible resource for astronomical research for decades to come, enabling the future research of today’s young astronomers in the UK, Europe and the World.

“Gaia is raising excitement and opportunity, bringing the next generation of researchers together to tackle many key questions in our understanding of the Milky Way.”

More data releases will be issued in future years, with the final Gaia catalog to be published in the 2020s. This will be the definitive stellar catalog for the foreseeable future, playing a central role in a wide range of fields in astronomy, Gilmore added:

“This vast step into a new window on the Universe is a revolution in our knowledge of the contents, motions, and properties of our local Universe.

“We look forward to the international astronomical community building on this European project, with its major UK contributions, to interpret these Gaia data to revolutionize our understanding of our Universe.

“This is a magnificent harvest, but cornucopia awaits. We are all proud to be part of this magnificent project.”

Provided by: University of Cambridge [Note: Materials may be edited for content and length.]

The post Gaia Has Created the Richest Star Map of Our Galaxy and Beyond appeared first on Vision Times.