BrandscoveryLast updated Apr 25, 2018Page Views 15
Share
WhatsApp has announced it will ban people under the age of 16 from using its service in the European Union. Following changes in European data privacy rules coming into force next month, European users will now be asked to confirm they are at least 16 years old when they agree to new terms of service. … 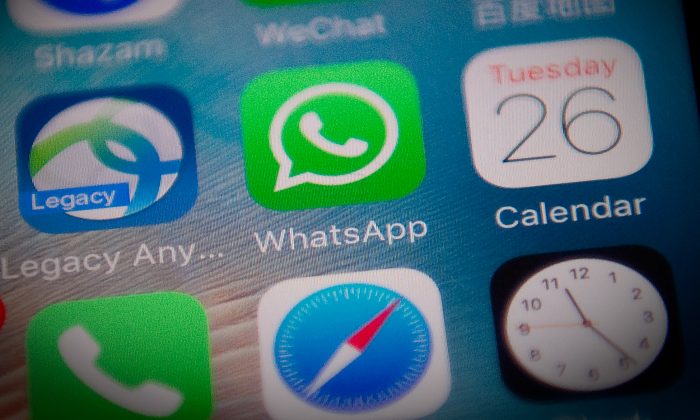 This photo illustration shows the Whatsapp application logo (C) on a smartphone screen in Beijing on September 26, 2017. (Nicolas Asfouri/AFP/Getty Images)

WhatsApp has announced it will ban people under the age of 16 from using its service in the European Union.

Following changes in European data privacy rules coming into force next month, European users will now be asked to confirm they are at least 16 years old when they agree to new terms of service.

It is unclear how the new age limit will be enforced.

Currently, users need to be at least 13 years of age, but WhatsApp said they are changing the rules for EU users ahead of the General Data Protection Regulation (GDPR), which comes into force on May 25.  The company plans to keep the age limit at 13 for the rest of the world.

The new rules mean that Europeans will have more control over how companies can use personal information. They can, for example, request their data is erased.

There are also rules designed to protect children from having their data collected.

The U.S. Children’s Online Privacy Protection Rule currently bans online companies from collecting data about users who are under 13.

However, Facebook, which owns WhatsApp, launched Messenger Kids, which is aimed at children as young as 6, in December 2017.

Facebook has a separate data policy, relying on 13 to 15-year-olds to nominate a parent or guardian who can grant permission for them to share on the platform.

If they don’t do this, they won’t see a fully personalized version of the site.

WhatsApp announced the new policy in a blog post, saying it did not intend to ask for new rights to collect personal information.

“Our goal is simply to explain how we use and protect the limited information we have about you,” it said.

Neuroscientist Dr. Tara Swart, who has studied the impact of social media and new technology on children, said that although the age limit would be easy to circumvent, it would help parents protect their children online.

“People get random messages through Instagram, Snapchat, and WhatsApp from people saying, ‘I’ve seen your profile picture, you look really pretty, I’d like to be friends,'” Dr. Swart said. “That’s very dangerous for a 13 to 16-year-old to make a decision about whether they should be in contact with that person or not.”

She continued: “As a society—and [this is] backed up by the neuroscience—we have a bigger-than-ever responsibility to protect children’s, not just privacy, but safety. The world is so different to what it was like when anybody that’s a parent of a 13-year-old now was 13 themselves.”

The EU’s GDPR is the biggest overhaul of online privacy since the birth of the internet, giving Europeans the right to know what data is stored on them and the right to have it deleted.

Other tech firms like Apple have said they will implement the protections provided by the GDPR worldwide.