How Spiritual Faith Prevails Over Atheist Communism, Torture and Death

When the atheist communist government in China begins arresting and torturing practitioners of a fast-growing spiritual faith, the believers rely on mercy to survive.

In the 1990s, tens of millions of Chinese from all walks of life began to practice a spiritual faith called Falun Gong (also called Falun Dafa).

The meditation exercises improved their health and the three universal principles—truthfulness, compassion and forbearance—elevated their morality.

But China’s atheist communist government launched a massive persecution, and started arresting, torturing, and killing these peaceful practitioners of this spiritual faith.

To survive the communist government’s brutality, Falun Gong practitioners would have to rely on mercy, not revenge, to survive.

Story of Falun Gong in China

At the core of Falun Gong are the values of Truthfulness, Compassion, and Tolerance (or in Chinese, Zhen 真, Shan 善, and Ren 忍). Falun Dafa teaches that these are the most fundamental qualities of the universe, and takes them to be a guide for daily life and practice.

When Mr. Li Hongzhi introduced Falun Gong to the public in May, 1992, he made public not just a qigong practice to improve health and wellness. Falun Gong represented a rediscovery of the “old, good things of China.”

The strength and honesty of Taoism.

The compassion and goodness from Buddhism.

The wisdom to deal with people and social settings with righteousness and tolerance from Confucianism.

Falun Gong represents a direct and authentic connection to genuine traditional Chinese culture, and with its introduction, the transformative power of these profound ways was restored to the Chinese people.

And so it grew in popularity…. exponentially.

By 1999 — just 7 years after its first introduction to the public — there were 100 million people practicing throughout China. 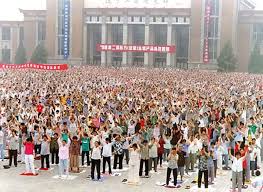 Examples of people practicing Falun Gong in China Before the persecution  (minghui.org) 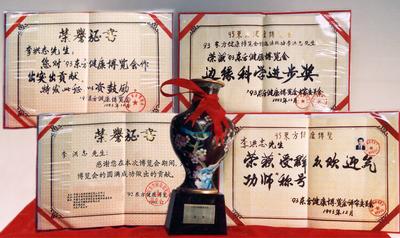 In 1999, there were 100 million people practicing Falun Gong in China. Because of its popularity and independence, communist leader Jiang Zemin ordered the practice be “eradicated.” Millions have been detained or imprisoned. Over 100,000 have been tortured or abused in custody, and thousands have died from torture in custody.

China experts at the time say Jiang was jealous that Falun Gong’s widespread popularity was overshadowing his own legacy, and at the same time, Jiang hoped to use the campaign against Falun Gong to build up his own power base.

“Defame their reputations. Bankrupt them financially. And destroy them physically!”—Jiang Zemin

Even more horrific are findings from independent investigators concerning the systematic killing of Falun Gong practitioners so their organs could be used to fuel China’s booming organ transplant business. In 2016, the U.S. House of Representatives unanimously passed House Resolution 343, which cites “persistent and credible reports of systematic, state-sanctioned organ harvesting from large numbers of Falun Gong practitioners. ...”

In June 2019, an independent tribunal—chaired by Sir Geoffrey Nice QC, who previously prosecuted war criminals—released its conclusion that Falun Gong practitioners have been, and continue to be, killed for their organs “on a significant scale.”

The decimation of China’s social fabric due to this persecution is hard to overstate.

The persecution of Falun Gong hurled the country back to the dark days of the Cultural Revolution.

Excerpt of the article: May 13 commemorates 21 years of peacefully defying communist ban on truthfulness compassion and tolerance

Governments around the world have either condemned the practice or supported an end to the CCP’s arbitrary detention, torture, organ harvesting, and killing. The U.S. Congress unanimously passed House Resolution 343 in June 2016 to condemn state-sanctioned forced organ harvesting in mainland China, and demand the CCP immediately end organ harvesting of all prisoners of conscience.

The Canadian Subcommittee on International Human Rights unanimously passed a motion in November 2014 to condemn and demand an immediate end to organ transplantation from living or deceased donors without free, informed, and specific consent.

The European Parliament passed resolution TA-8-2016-0227 in May 2016 for member states to criminalize the removal and trade of human organs, bring perpetrators to justice, and strengthen sanctions against countries that allow the act.