BrandscoveryLast updated Sep 01, 2017Page Views 310
Share
NEW YORK—Jessica Artman set aside her “stepping stones” to be shipped to Paris. She called those drawings and paintings “the lessons”—not her best work, nothing for sale,... 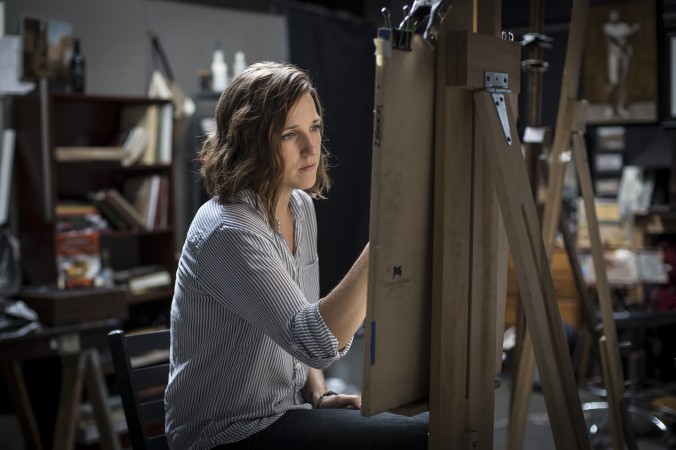 NEW YORK—Jessica Artman set aside her “stepping stones” to be shipped to Paris. She called those drawings and paintings “the lessons”—not her best work, nothing for sale, but she would never get rid of them either, she said, because they were “all ‘aha! moments.'” Those breakthroughs on paper will serve as good examples when she begins teaching at the recently founded Paris Academy of Art this October.

She pointed at a pile of her artwork, supplies, and books waiting to be packed in her studio space at Grand Central Atelier, where she has been teaching and developing her work as an artist in residence. “I’m consumed with the idea of packing. Once that’s done, then I think I can really start to get excited,” she said, full of anticipation. 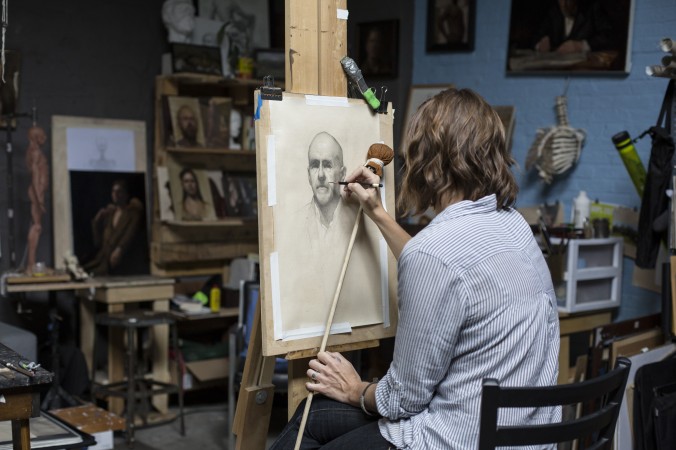 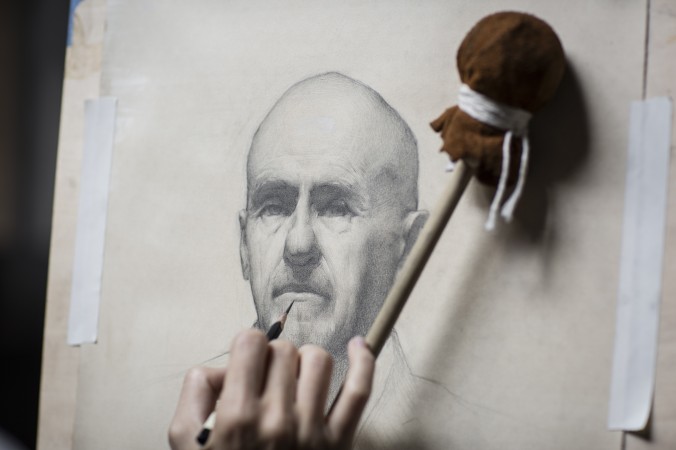 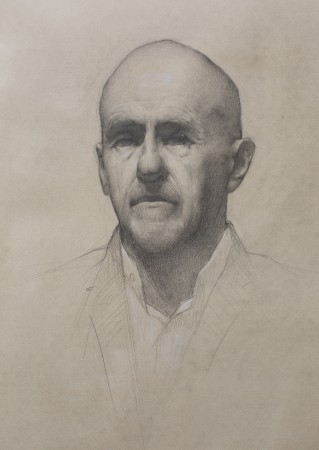 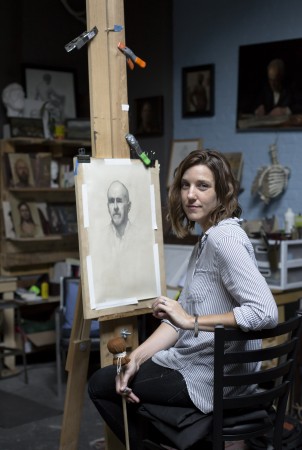 Art ateliers and academies have reemerged in the past 20 years, mostly in the United States and Europe. But the Paris Academy of Art is the first to be established in Paris since the classical training offered at L’École des Beaux-Arts had, by 1968, been practically obliterated. The new academy is very small in comparison to the massively influential institution that reached its peak in the late 18th and early 19th centuries, but it is starting to fill a major gap in art education in the city that is home to the Louvre—the world’s largest art museum, no less.

In the 19th century, Paris was the place to be for artists who wanted to show their work at the prestigious Paris Salon. American students flocked there to learn from artists like William-Adolphe Bouguereau and Jean-Léon Gérôme. Some of these Americans, like George Bridgman and William McGregor Paxton, passed on the academic art training back in the United States, enabling the tradition to be kept alive, just barely, through the 20th and 21st centuries.

Fast forward to 2017, and Artman, together with her boyfriend, sculptor Charlie Mostow, and fellow painter Patrick Byrnes, will be part of a new, small batch of Americans in Paris contributing to the Western art heritage, which is rooted in the fundamentals of drawing, painting, and sculpting from life. 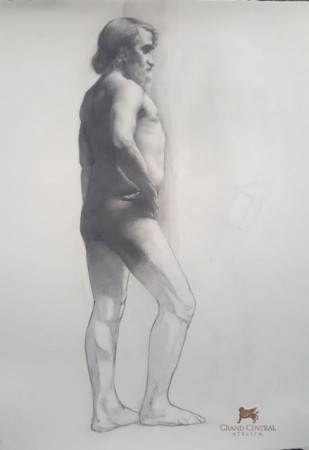 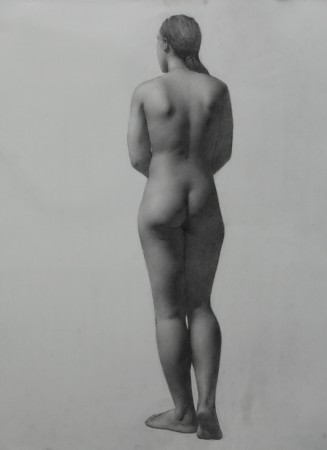 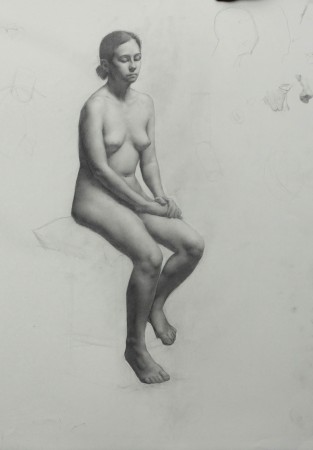 In her studio, Artman pointed out some of the academic figure drawings in her portfolio. Some were shaded smoothly, with barely perceptible pencil marks. Those took her about 80 hours to complete. In some of her other drawings, small hatch marks were visible. Those took her about half the time, she explained. Yet in those abbreviated, hatch-marked drawings, she had enough information and anatomical knowledge to be able to continue modeling the form into a smooth finish, without having to look at the model again. For the curriculum at the Paris Academy, she foresees working with the model less than 80 hours.

Every atelier or academy has its unique approach, based on the training and background of the teachers. Artman looks forward to contributing to the traits of the new academy.

From a young age, Artman always knew she wanted to paint. She studied at Florida Southern College, where she completed her bachelor’s degree in fine art. The curriculum was typical of fine art programs, which lack the kind of rigor and discipline required for the classical realism that is characteristic of ateliers. Later, she studied at the National University of Ireland in Galway, where she had to stand her ground. 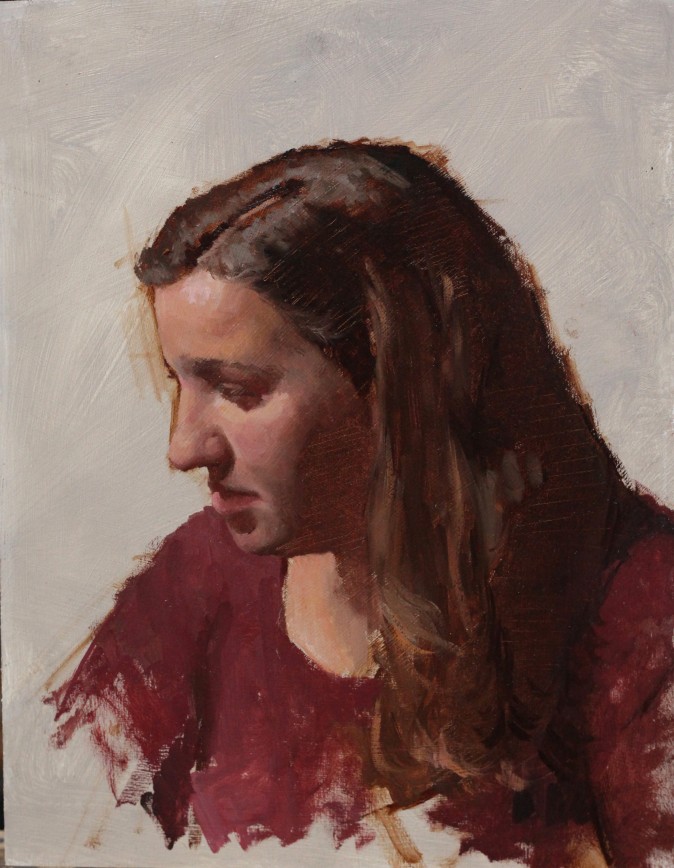 “It was very contemporary. The whole time, I was basically defending painting,” she said. “Every project or concept that I had thought of for a painting, I was told, ‘You should do this as an installation,’ or ‘You should do that as a performance piece,’ or ‘Make a video.’ It was very challenging. … While I did learn a lot, I never felt I was given what I wanted. I felt that they were trying to mold me into something else,” she said.

In terms of the art history she was taught in her degree programs, she said, “everything was very contemporary, or about [only] what was popular starting in the 15th century, up until today. … I didn’t learn anything about classical realism. We touched on neoclassicism briefly, and then it went straight into Impressionism.”

Determined to finish what she had started, she completed her Master of Fine Arts degree in Ireland and went back to Florida Southern College to teach drawing and design. Teaching helped her to elevate her own practice, she said, “because I had to articulate something a hundred different ways.” But she still felt limited.

When a drawing student asked her once, “How do I make this more real?”, she was at a loss for words and realized that what the student was longing for, she longed for herself. “There was still a flatness to my drawing,” she said. “I didn’t know how to create form in an academic sense, and I didn’t have the [visual] vocabulary to explain it.”

She eventually took a workshop that the Philadelphia-based Studio Incamminati gave in Florida. She started to understand that there is a structured method for learning how to draw, for gaining a deeper understating of classical form and design, and that it was possible for her to refine her drawing to look more three dimensional, she said. Through conversations at that workshop, she learned of other ateliers and academies like The Florence Academy of Art, The Ryder Studio, Aristedes Atelier, and Grand Central Atelier, where she eventually completed her studies in its core program.

Grand Central Atelier “felt like home,” she said. “It was something that I had always wanted.”

As a young artist, Artman is just at the cusp of developing her voice. “I’m so absorbed in the technique and craft, in being the best that I can possibly be and understanding every mark that I make in relation to what I am observing, [that] I don’t want to try to put a voice on it yet,” she said.

During her university studies, she was pushed to write an artist’s statement and to have already developed a voice before she had even mastered any fundamental techniques. She feels the opposite approach is better, understanding that it can take decades for an artist to develop their visual signature. “I think it is important to not force anything,” she said. 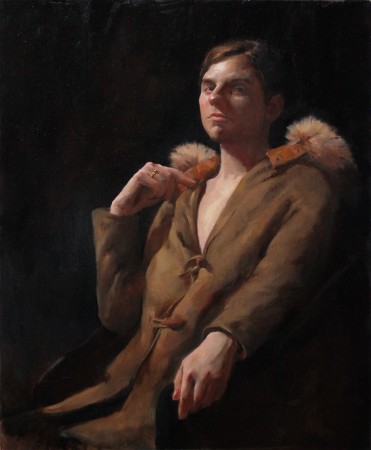 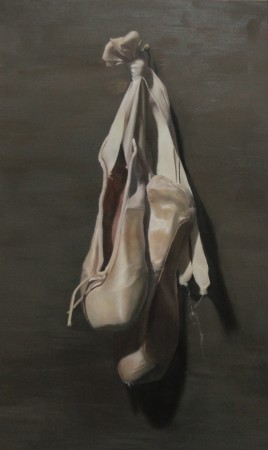 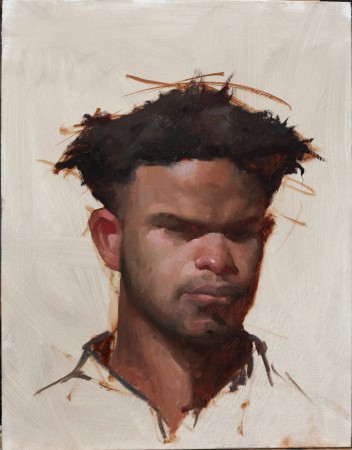 So much of contemporary art is fixated on the idea of breaking rules or pushing boundaries. Reflecting on how she had surpassed that trajectory, Arman said, “Drawing isn’t about being free, it’s about really learning.” She wants to develop her own voice skillfully, without having to repudiate past traditions. She likes the idea of experimenting within certain parameters, not breaking rules just for the sake of breaking them.

“If somebody tries to do representational work when they don’t have this foundation, or maybe they want it but haven’t discovered it yet, that is different from someone who has the training and is deliberately selective with the process. You can tell the difference,” said Artman.

“I think it was Picasso who wanted to forget everything he had learned to go back to painting like a child. I think that is hogwash,” she said. A child draws as a means of communication, but an adult who wants to regress to drawing like a child is basically limiting his or her potential to communicate in a more sophisticated way.

Arman loves the textural aspect of painting and the ways it can be layered. She is inspired by who she calls the “meaty painters”—masters like Diego Velázquez (1599–1660) and Ilya Repin (1844–1930)—and she mentioned the painting “The Horse Fair” by Rosa Bonheur (1822–1899) as one she always views when she visits The Metropolitan Museum of Art. “There is something about their works that is so immediate. It is in the paint handling. … When you are laying those marks down, you have to be intentional,” Artman said. It’s the conscious decisions of the artists that speak of their individuality. “Your marks are your voice, essentially,” she concluded.

Some of the most seemingly inconsequential events can inspire Artman. It can be “a certain configuration of objects, the way somebody is sitting, or a weather pattern, but it’s always something that is happening outside of me that catches my attention,” she said. There is nothing self-indulgent about it.

In contrast to much of contemporary art, which focuses on the artist as a persona, Artman feels she cannot hide behind any pretense. “As an artist, and for your subject matter, you have to be honest, truthful, and intentional.” It’s what art lovers long for: to be elevated and shown how to see even ordinary people and things in an exalted light. 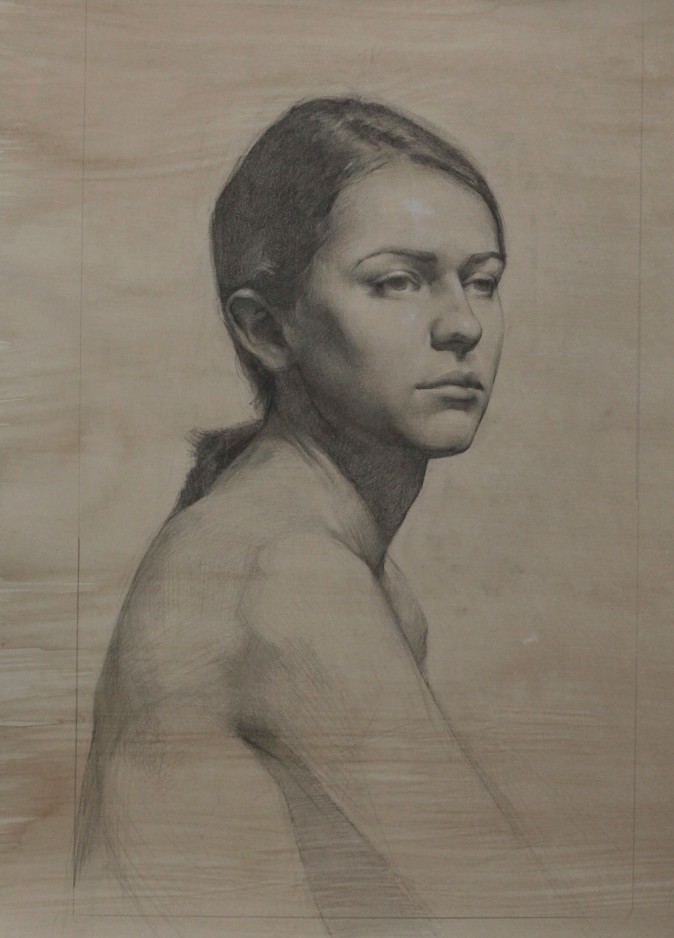 “When somebody is viewing this kind of art, it’s more about them understanding what’s outside of themselves,” she said. To create such art, Artman has to work from life—that is, drawing or painting a person or thing that is present, as opposed to something that has already been mediated by photography, or some other medium.

“It takes a certain collaboration between your subject and the artist. Artists aren’t people who just spit out ideas. It’s all about experience. So if you are working from a photo in a studio by yourself, that’s the most mind-numbing thing I can imagine,” she said.

In Paris, she will be teaching anatomy. Her intention is for students to get comfortable with a concept of the figure so that they can rely on the model more efficiently, but without using photographs.

“Working from photographs shuts down that creative flow. You don’t realize when it starts happening, but you will start to copy the photo,” she said. “There are people who are really good about using photos as a reference, but it’s very difficult to train yourself to do that well.” 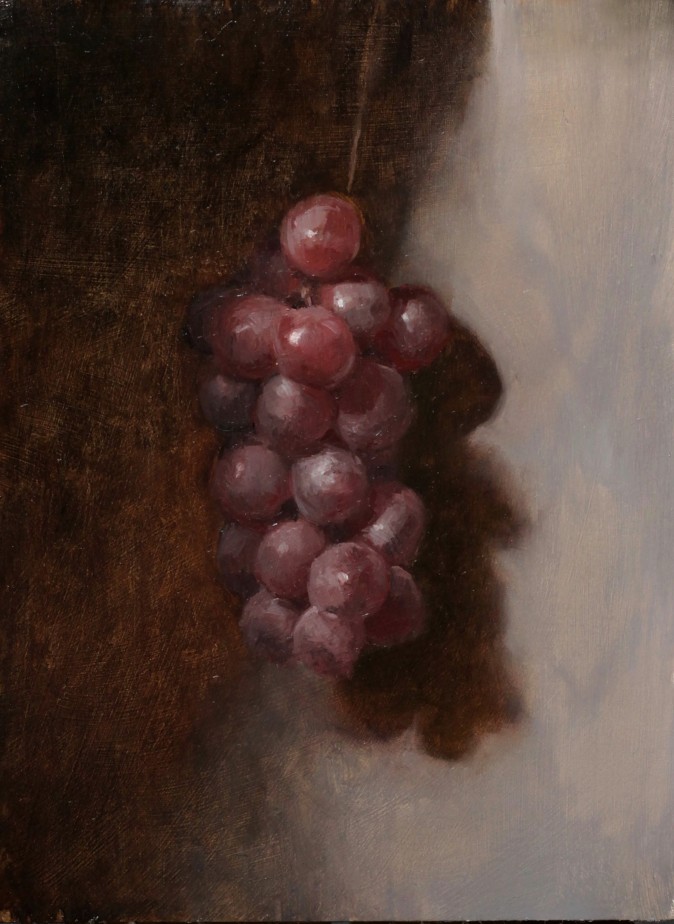 The expression of a model will change over time, depending on what they are thinking. “It’s interesting how much you get to know somebody, even when they are sitting still and they are not saying anything. It’s kind of cool,” she said.

As Artman paints, she can enter a very calm state that allows for an exchange to happen between her and the model. That exchange gives her the possibility of infusing vitality into her drawings or paintings and going beyond merely displaying technical skill.

“You learn how people relax or what their tendencies might be, but sometimes they surprise you,” she said. She makes choices about what will be, in a sense, immortalized on canvas. It’s that experience that she looks forward to communicating with her artwork, which can only be done from life.

“I want to create work that somebody is going to want to look at for their entire life, and they will find the same enjoyment, or their level of enjoyment will even grow with the piece. It’s like having a new member of the family,” she said.

This conviction and sensibility is what Artman hopes to pass on to her students in Paris and in her own work. 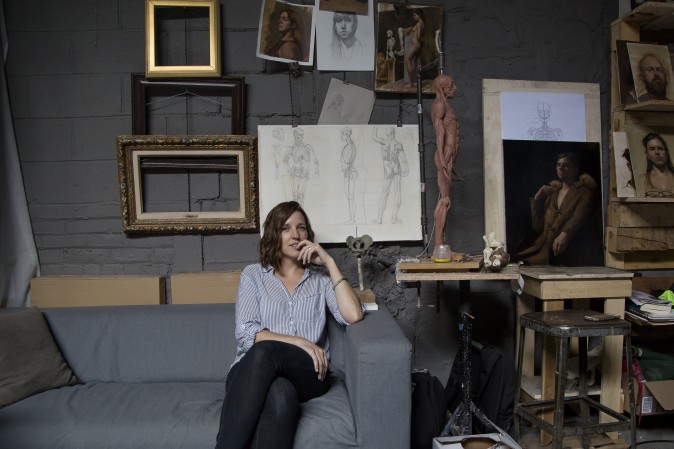