BrandscoveryLast updated Sep 04, 2017Page Views 87
Share
NEW YORK—The smell of oil paints filled the room. It was so quiet, you could hear the rustle of paintbrushes as 40 artists painted shoulder to shoulder in the main gallery of the Salmagundi Club.... 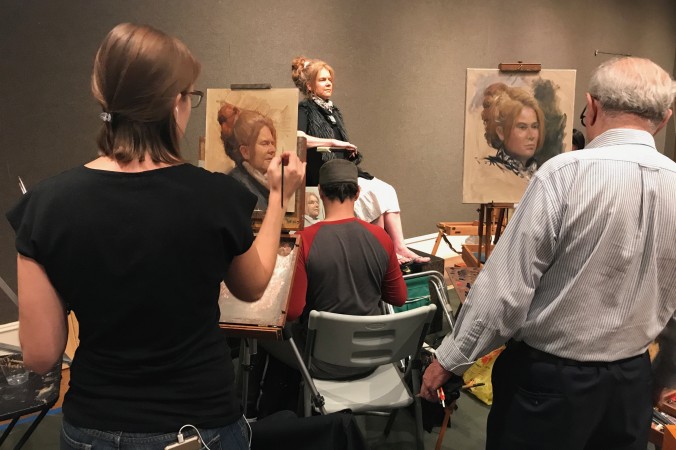 NEW YORK—The smell of oil paints filled the room. It was so quiet, you could hear the rustle of paintbrushes as 40 artists painted shoulder to shoulder in the main gallery of the Salmagundi Club. They had three and a half hours—split by five-minute breaks between twenty-minute sessions—to complete a portrait. Their collective sense of focus was almost palpable. The rhythm of them stepping to and fro at their easels to see their paintings in progress would occasionally ease the pressure, until the organizer, the Salmagundian and painting conservator, Alexander Katlan finally announced at the end of the last session, “Three minutes left!” 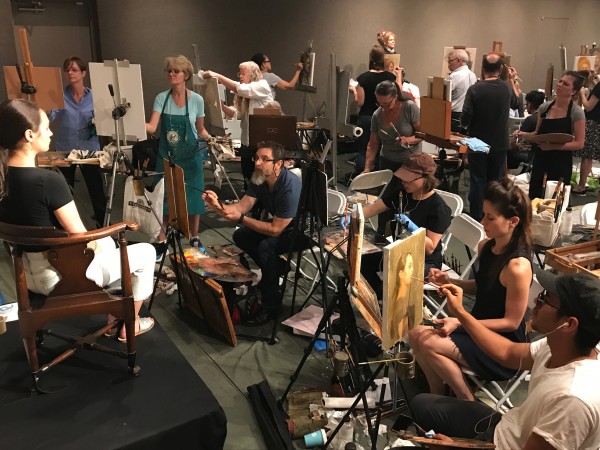 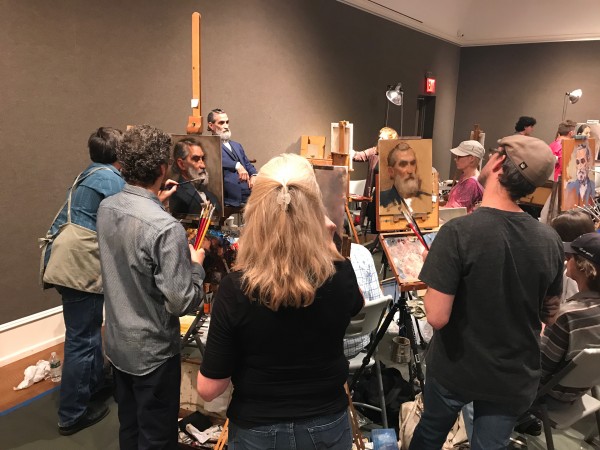 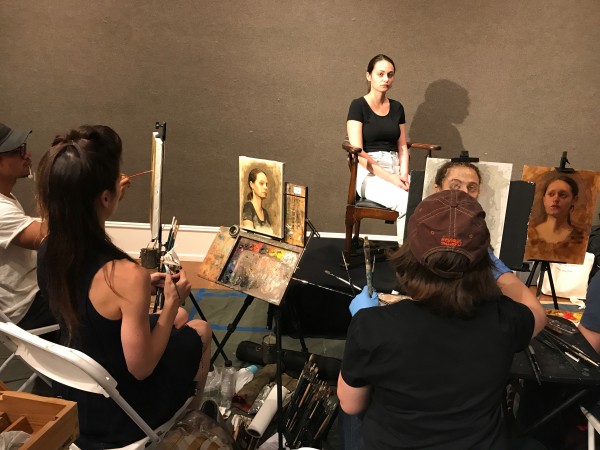 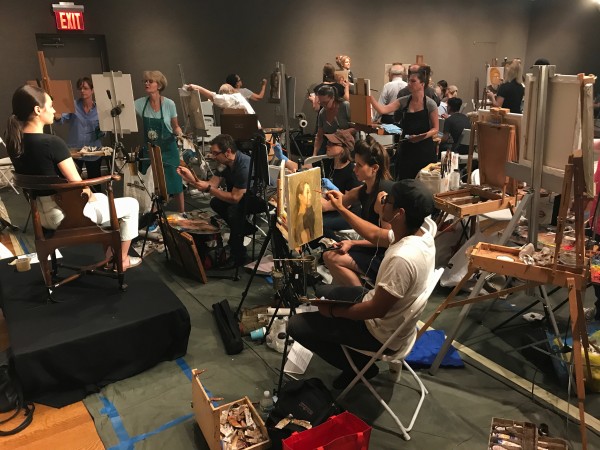 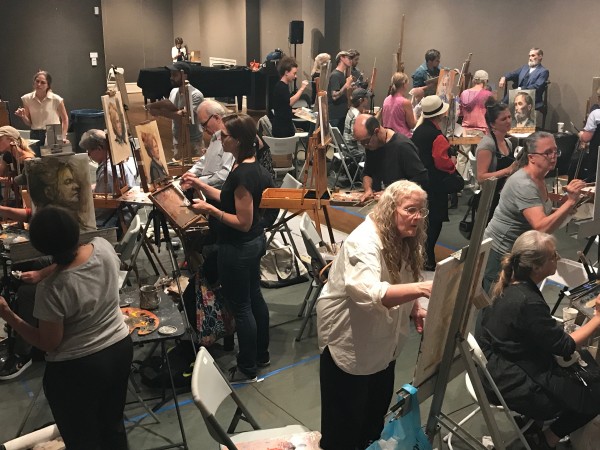 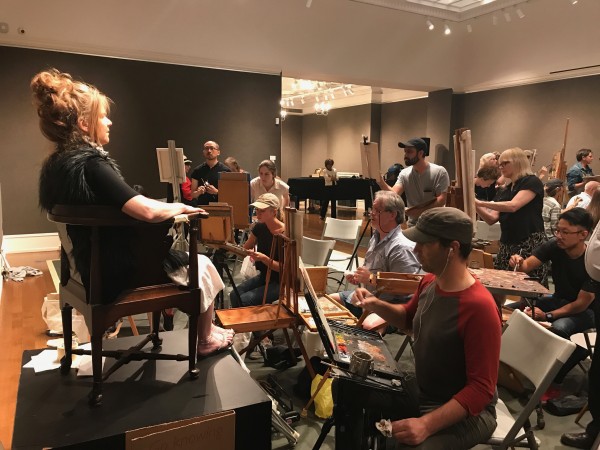 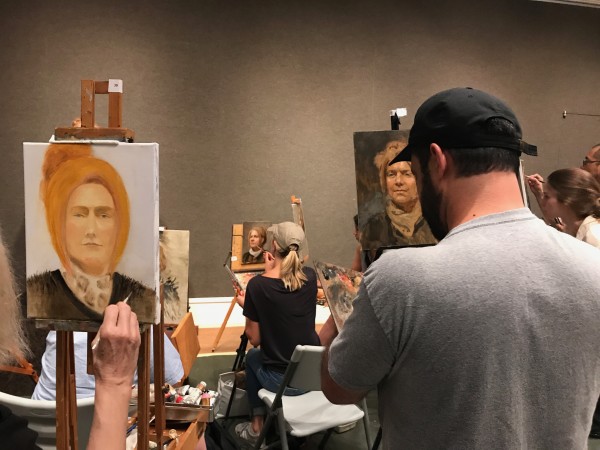 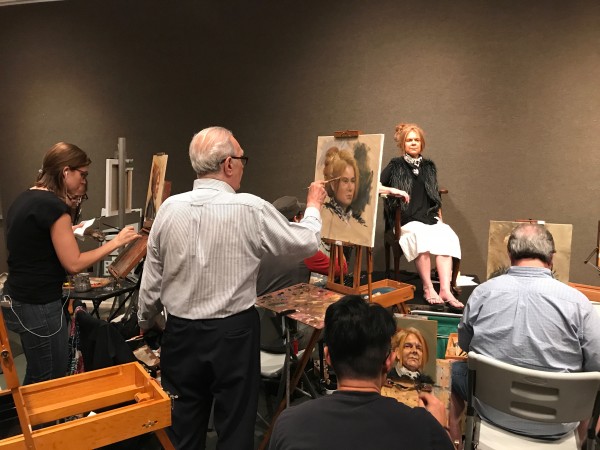 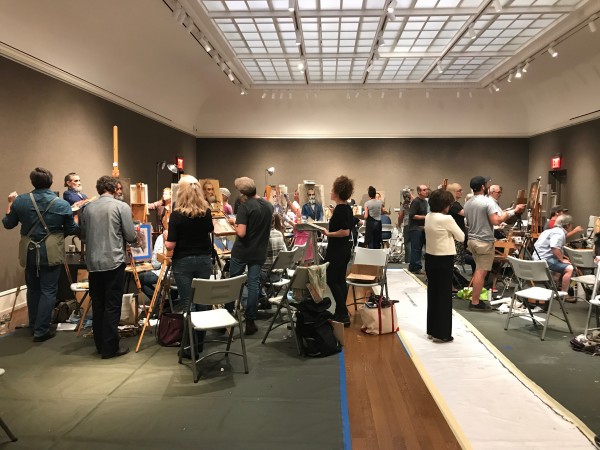 It was the first “Oil Portrait Sketching Competition,” the Salmagundi has held in its 146-year history, on Aug, 26. This year marks the 100th year anniversary for the club’s permanent home in the historic brownstone nestled in New York City’s Greenwich Village.

“I believe this is going to become a regular event; it is so exciting,” said the first vice president of Salmagundi, Elizabeth Spencer, before announcing the winners. “It’s going to be a great centennial—event, after event. This is number one, and it is fantastic!” she said beaming as the artists applauded and cheered.

The Salmagundi Club is the second oldest art organization in the country and one of the most active. The portrait competition elevated its liveliness up several notches.

“Competitions are fun, but really, I was looking forward to the social aspect of it—the camaraderie, peeking over and seeing how other people would be solving the same problems that I would be solving, in completely different ways,” said Gregory Mortenson who won the second prize for $500. 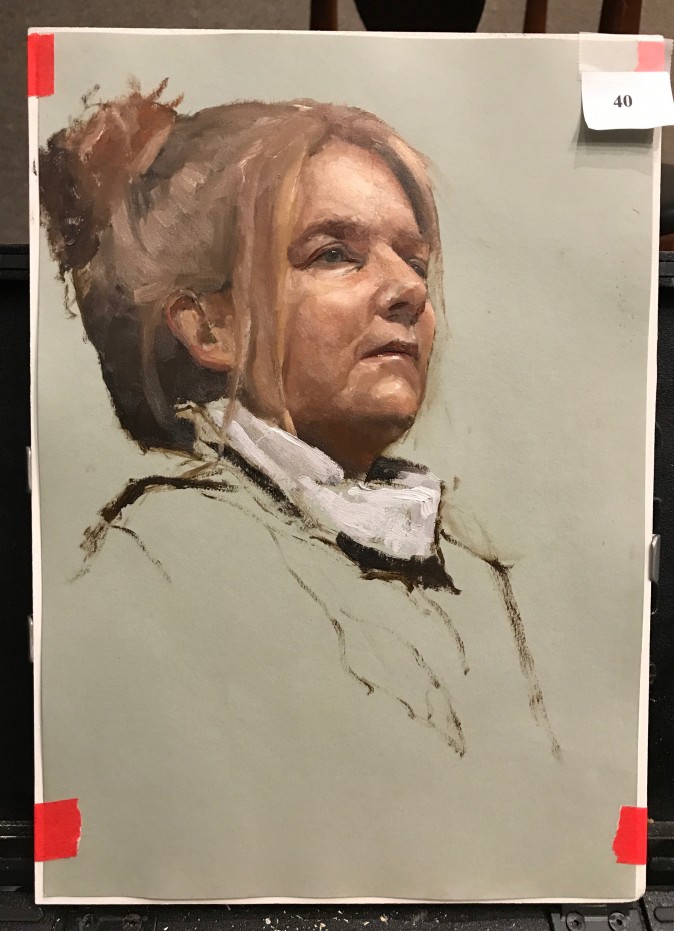 Mortenson registered for the competition at the last minute. He didn’t even think he would make the first cut.

“You can never go in expecting to win,” Mortenson said. “I’ve judged competitions and it is hard. You are faced with so many good paintings,” he added.

The judges quickly selected the top eight paintings, without debate, eliminating any paintings that were not as well executed in terms of technique. The second cut, down to five paintings, took longer to decide.

There are standards for which to judge a work of art, but in the final decision taste takes over. Katlan encouraged the judges  to evaluate the oil portrait sketches based on five criteria: on representing proportions convincingly, understanding facial structure, modeling the lights and darks consistently, and observing the light effect correctly. The two winners were selected based on those criteria, but above all, on their overall artistic strength.

As Mortenson was being interviewed for this article, his oil painting sketch had already been sold to another artist, raising his monetary award that day higher than the first-prize winner, Richard Piloco. 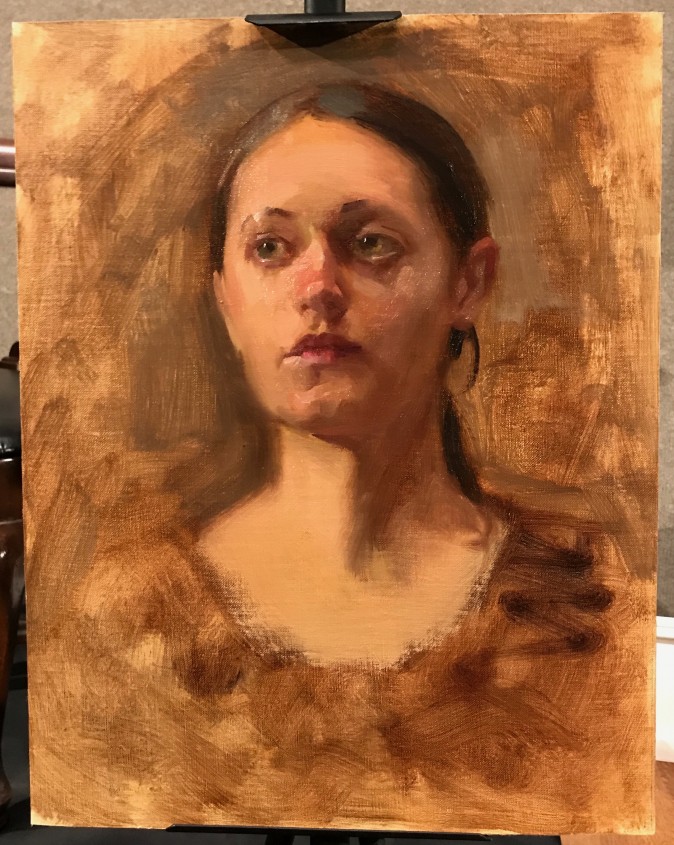 “I know a lot of the painters involved and they are all great painters. Plus, if you don’t get to pick your spot, it’s kind of the luck of the draw,” Piloco said. (Each of the artist’s spots, in front of one of three seated models, was randomly selected and numbered).

You could not quantify how much his spot in front of the model might have given him an advantage. “There were certain things that I did—when setting up to paint and recognizing how much light was on the model’s face. I was making decisions right from the start on how I wouldn’t want it to be, and I tried to paint that idea rather than directly paint what I saw,” he said.

Piloco then signed his painting, which will be added to the Salmagundi Club’s permanent art collection of about 1,500 works.

He was surprised he had won the purchase prize. The idea of competing doesn’t come naturally to Piloco, as he spends endless hours alone in his studio. 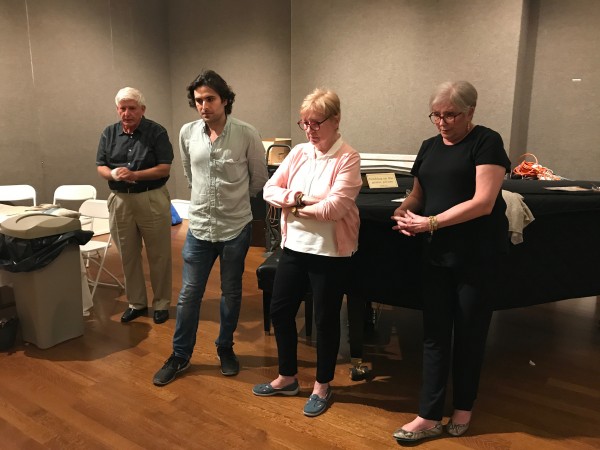 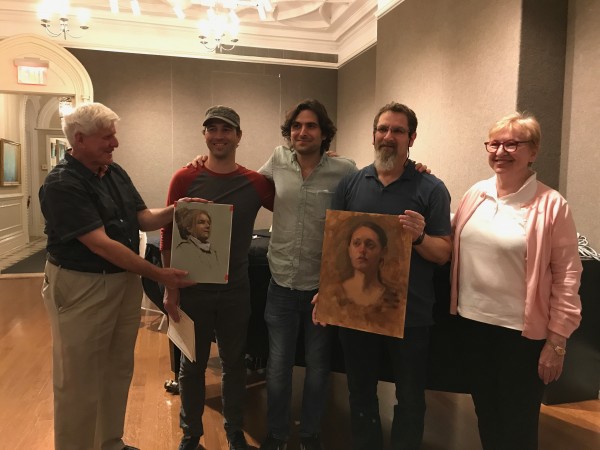 “Competitions are little nerve wracking because you are on display, and if you mess up, your warts and all are exposed,” he said. “It does get you out of the studio though. That’s what I enjoyed about it. I got to see people I haven’t seen in a long while.”

The artists mingled long after the winners were announced. Greetings, smiles and chatting filled the main gallery—gradually trickling away as the artists left and continued their conversations on the stoop of the historic Salmagundi brownstone, mentioning how much they enjoyed the event. 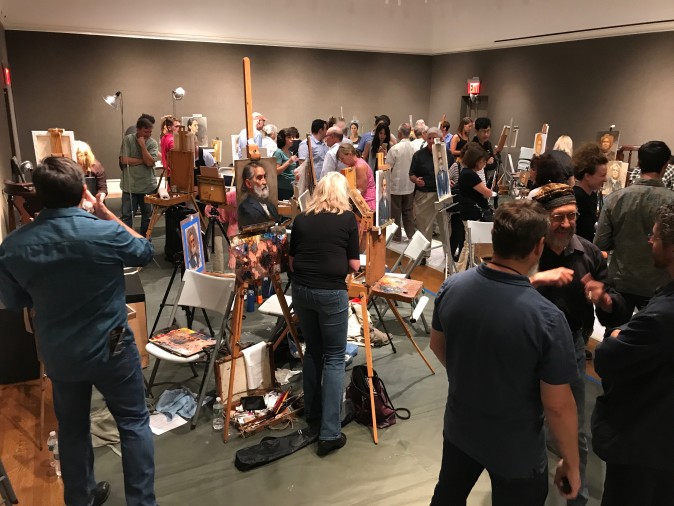 Artists wrap up at the end of the Oil Painting Sketch Competition of the Salmagundi Club in New York on Aug. 26, 2017. (Milene Fernandez/The Epoch Times)